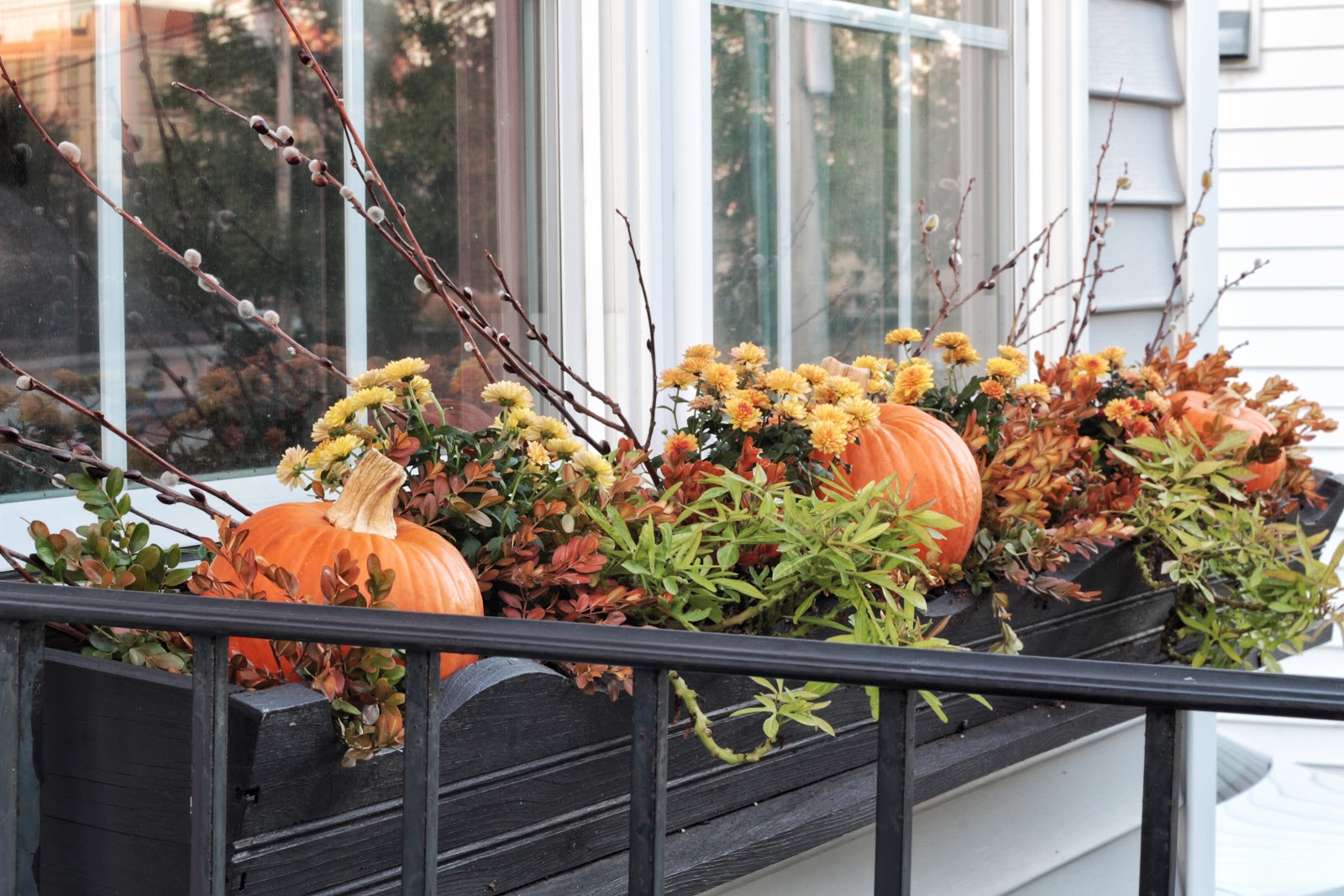 Happy Fall Y’all!  To say it is my most favorite time of the year would be an understatement. Over the past weekend, I got the itch to give the front of our home a little Fall Appeal (well, fall curb appeal).  And I started by creating an inexpensive autumn window box planter for under $20! 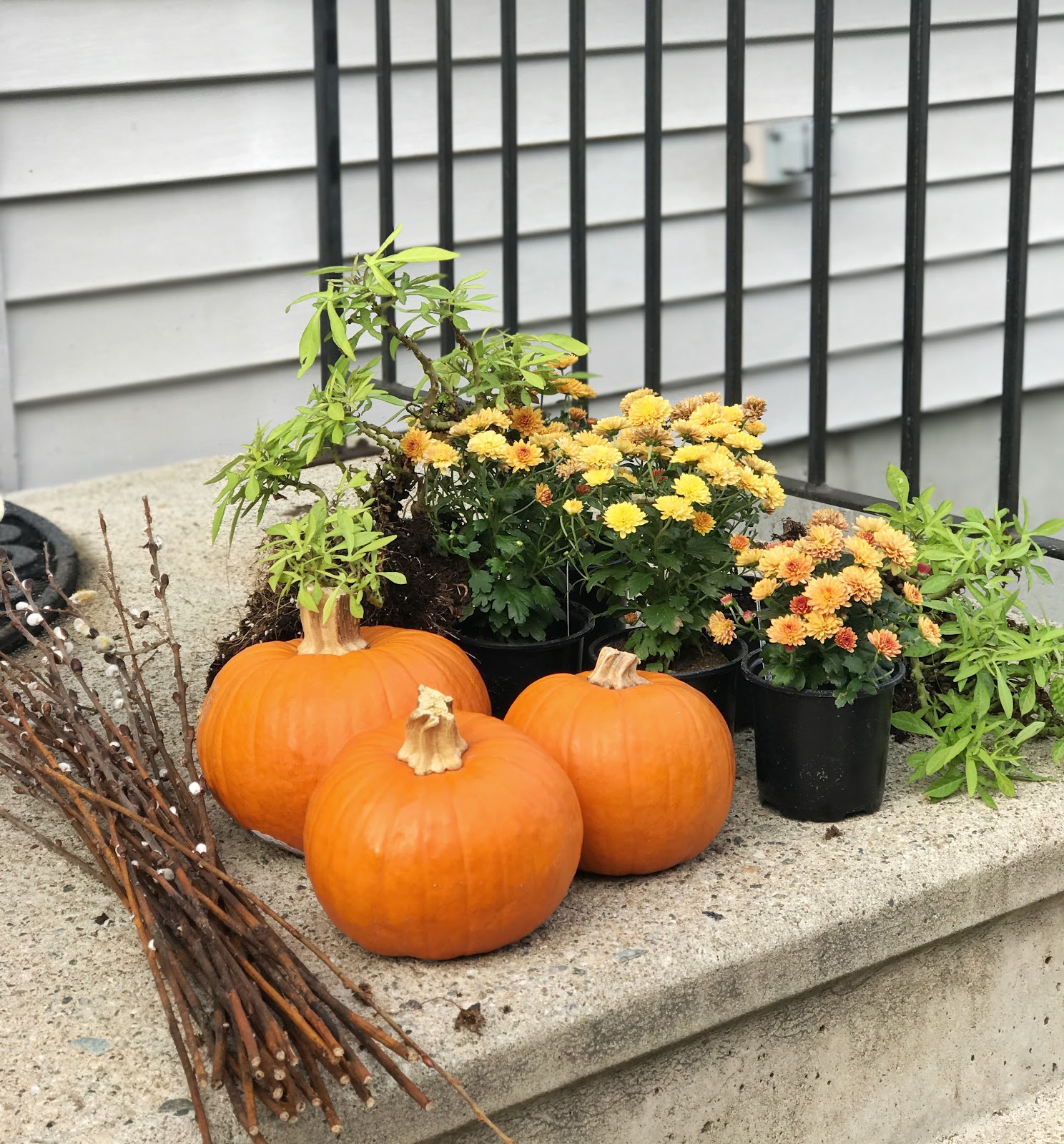 Filling planters can add up, so I challenged myself to stay under $20 for this large window box. To do so I grabbed some small clearance mums ($1 each) and 3 pumpkins (2 small and one a little larger at $3.50 each), for this window box. I really wanted to include some of those ornamental cabbages, but I had to abstain, as it would have pushed me over my budget at $5/piece .  So for greenery I grabbed two hanging vines from the dying window boxes in our backyard.

I had originally planned to use some hay to fill the box, but instead opted for some sticks which I intended on picking from the back yard.  But, when I got home I remembered the pussy willow branches I bought for my spring tour and decided to use those instead.

So here’s what I did: 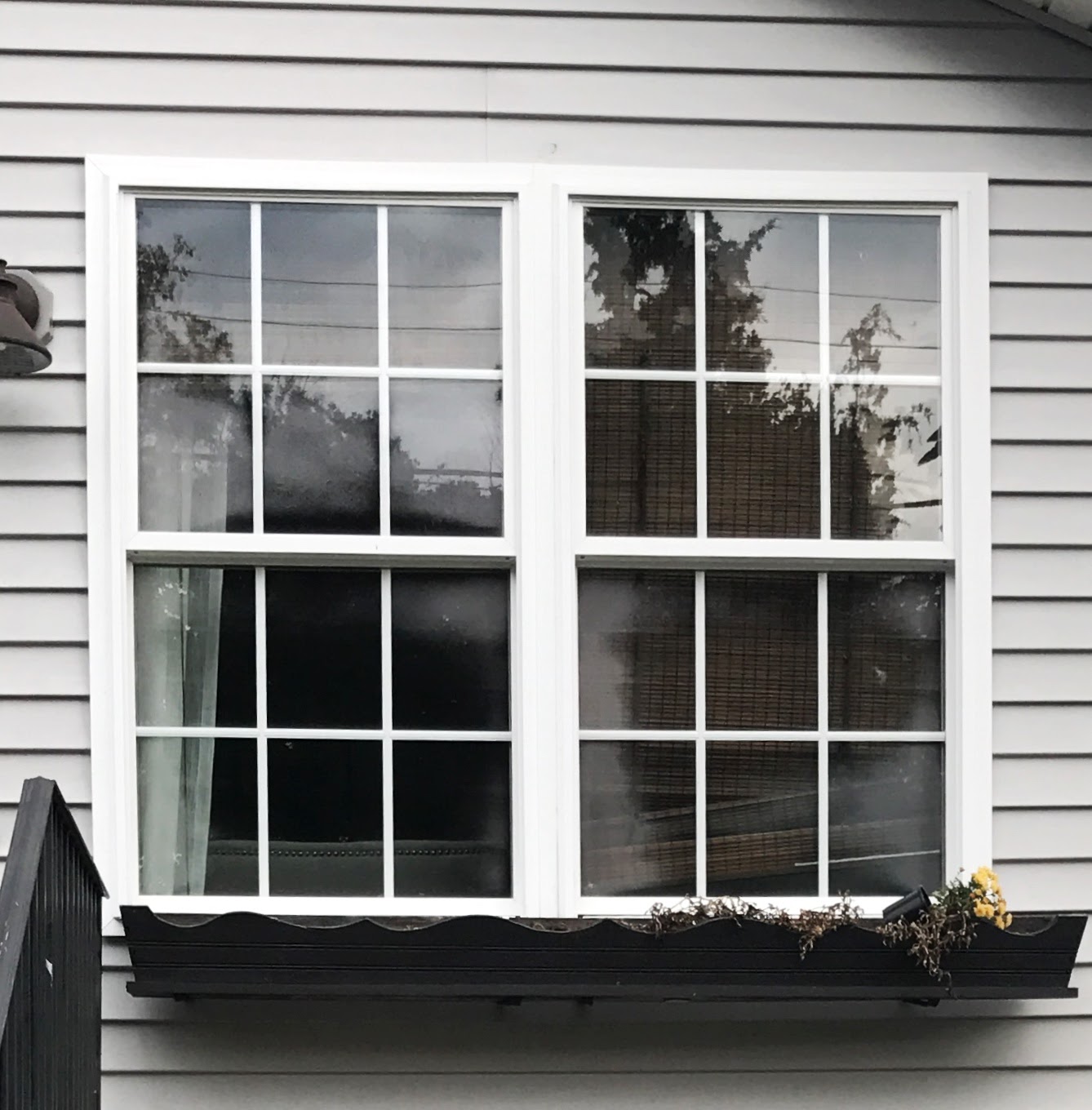 Cleaned out the old dried out plants and loosened the soil. 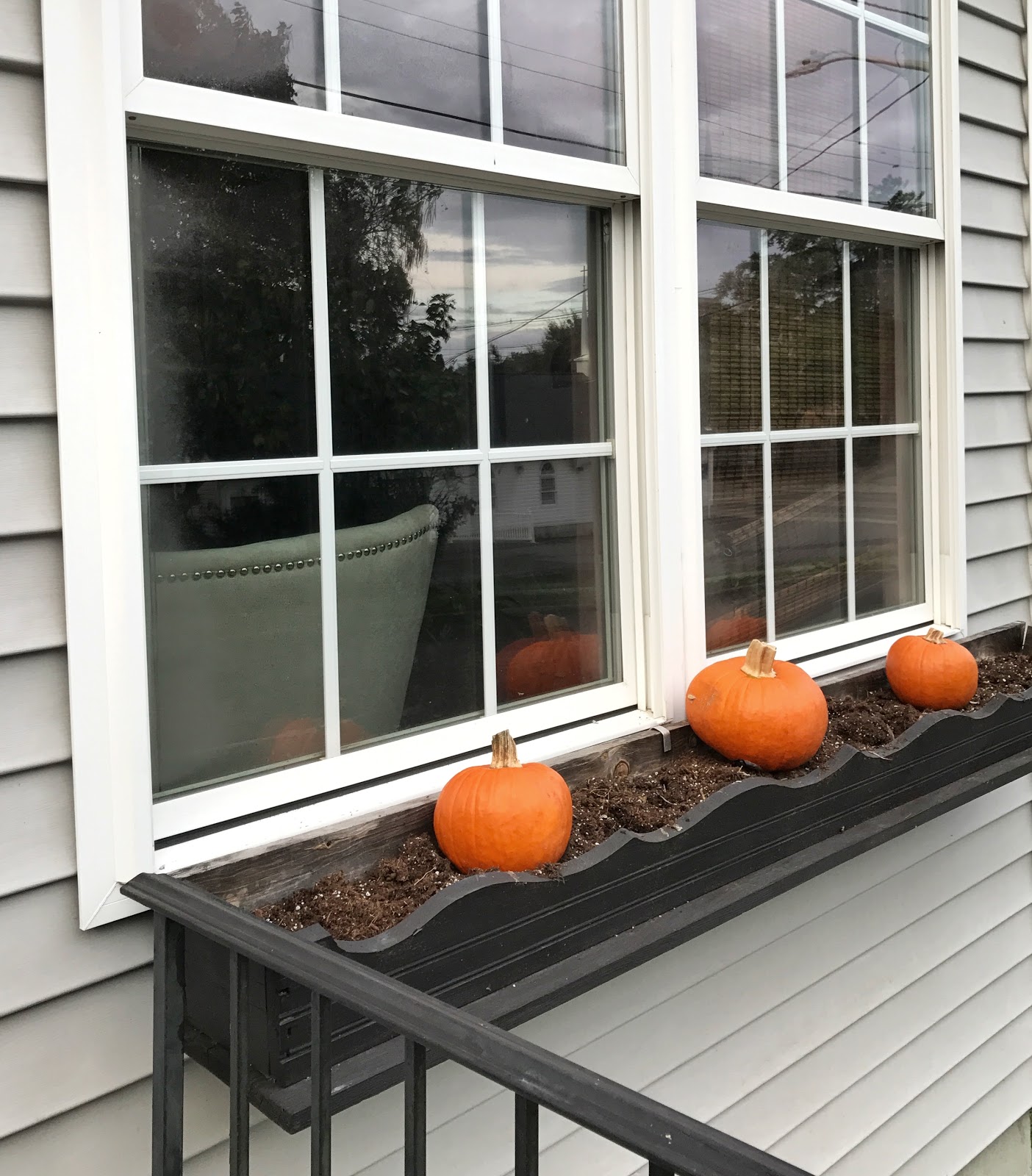 Put the pumpkins in place and then planted mums to flank the center pumpkin.  Then the sweet potato vine, then the other two mums.

Once I was done with that I decided to stick the pussy willow branches leaning out of the dirt for some height in the back. 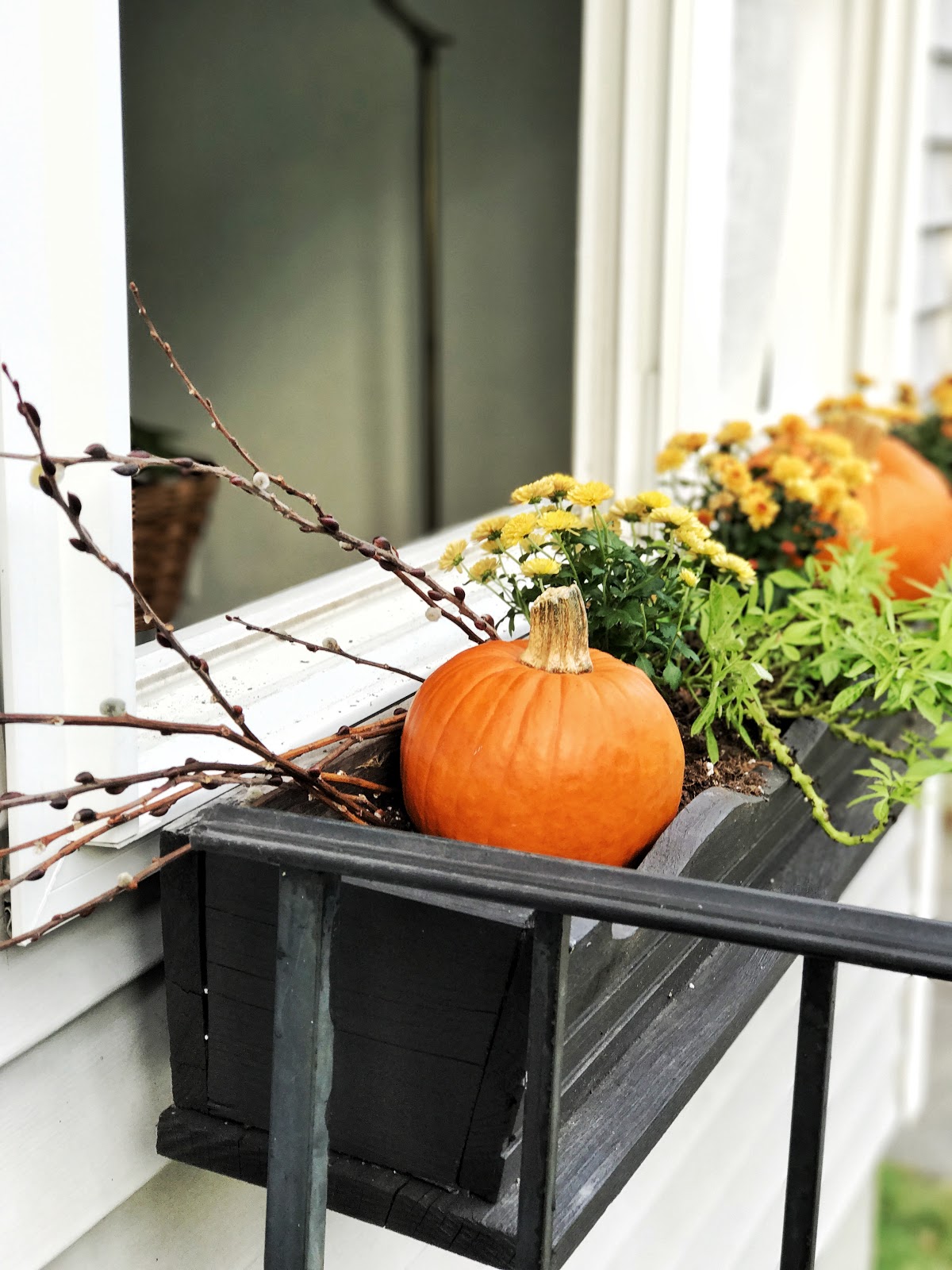 Then I stepped away and thought, man, something is missing.  It looked sad and wimpy. 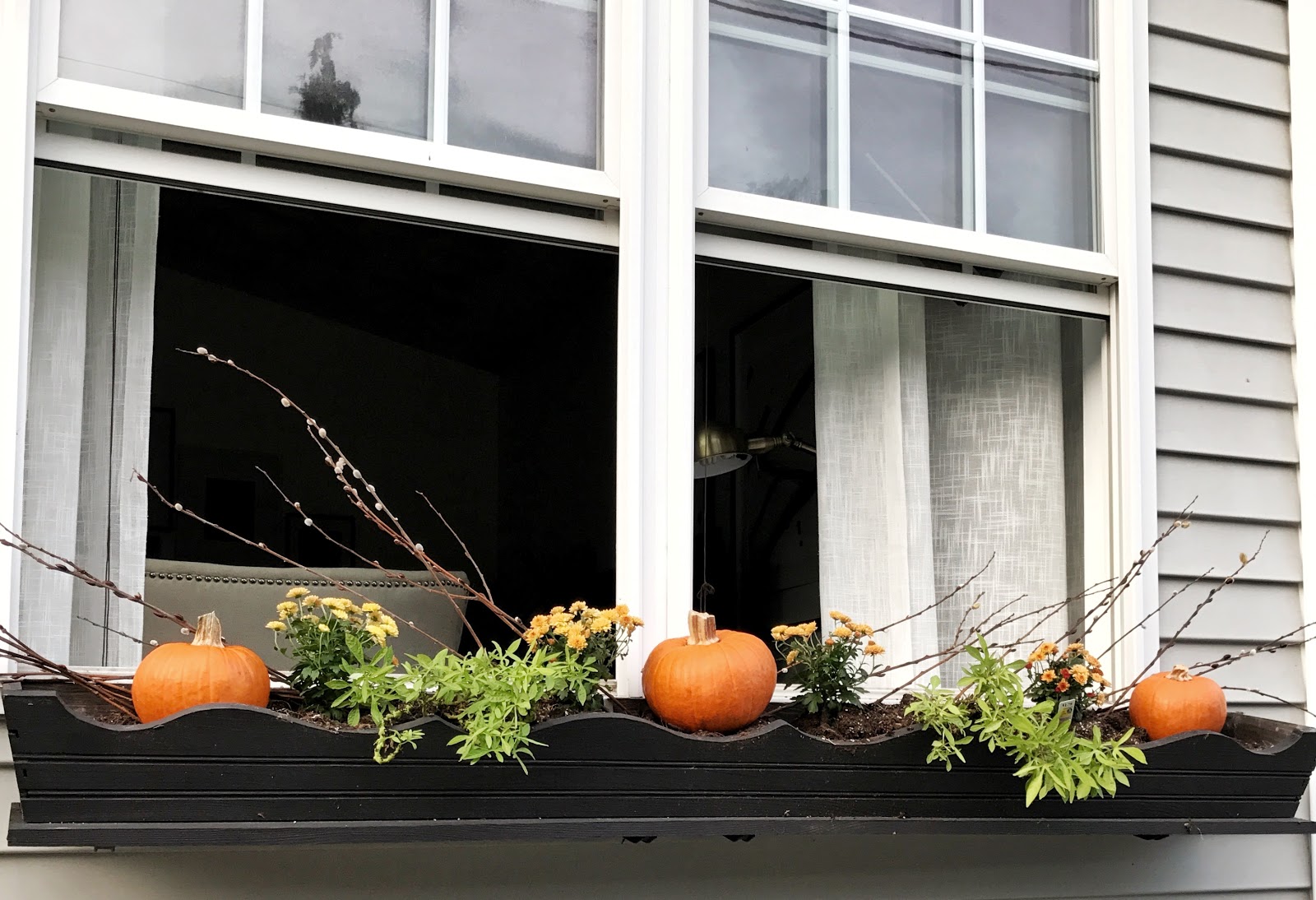 When assembling planters, a good rule of thumb is to have a Spiller (a hanging plant or vine), a Thriller (something for height) and a Filler (something full that fills in bare spaces)—Remembering this, I realized—I had my thriller (the sticks), I had my spiller (the vine) but was in need of a filler.  I remembered the dying boxwood in our backyard that I swear was beginning to look like a burning bush!  I love boxwoods because they are so hardy and tend to dry quite nicely.

But look at this: 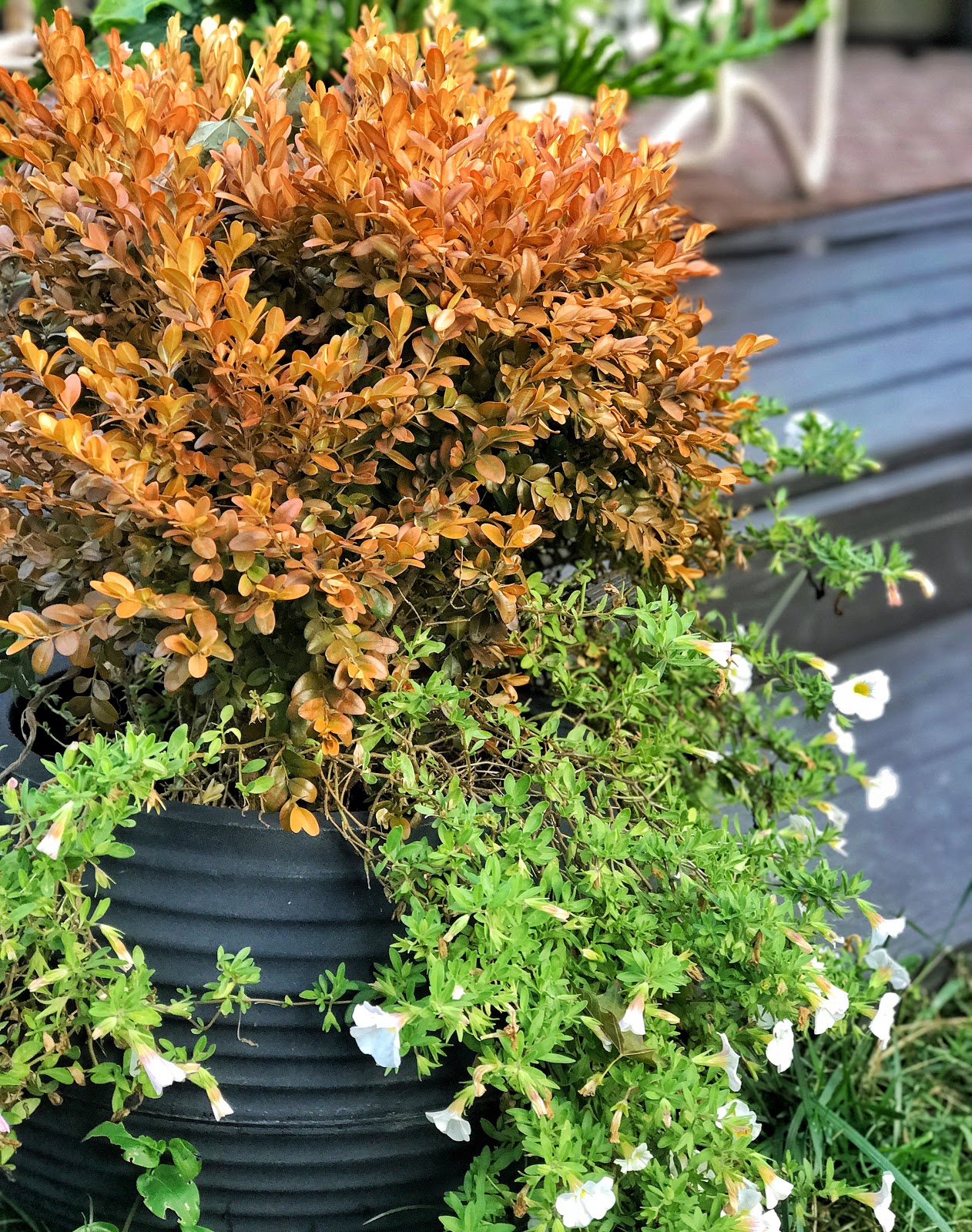 it had turned to beautiful shades of fall! 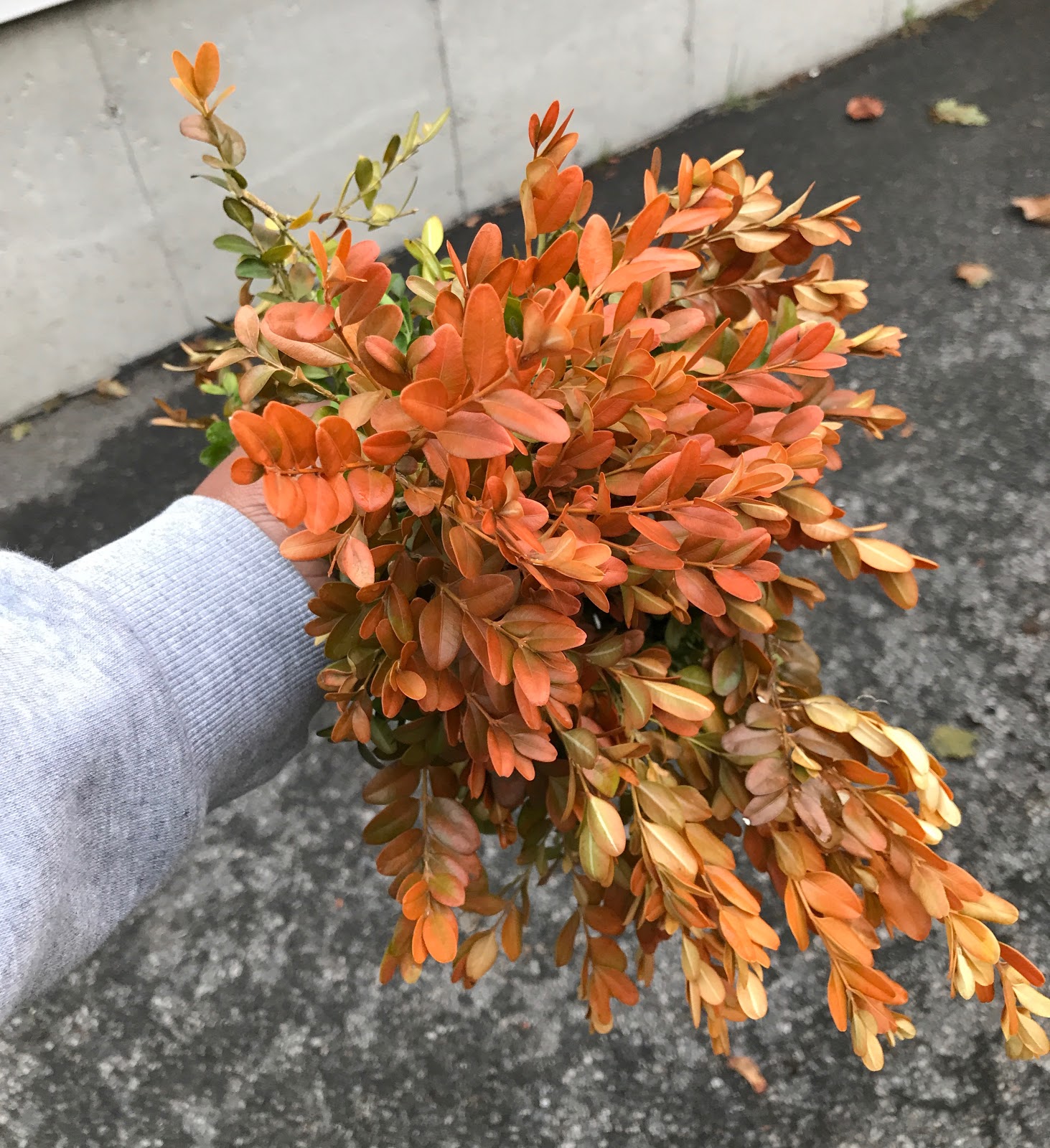 I snipped a few branches off and filled in the bare spots in my window box.  Tucked a little under the pumpkins and some behind and in between the mums until I achieved the look I liked. 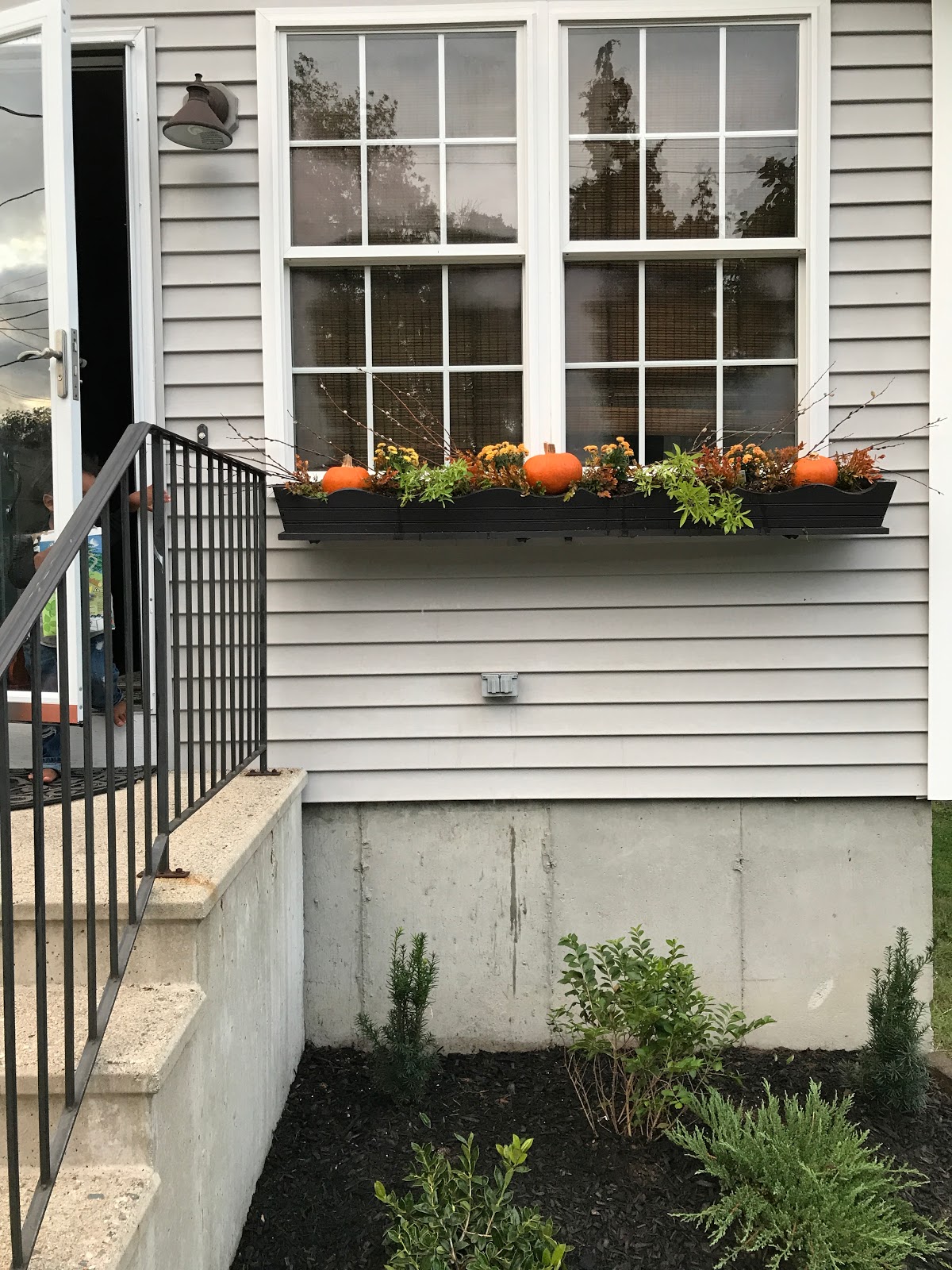 And overall, I don’t think it was too shabby for under $20 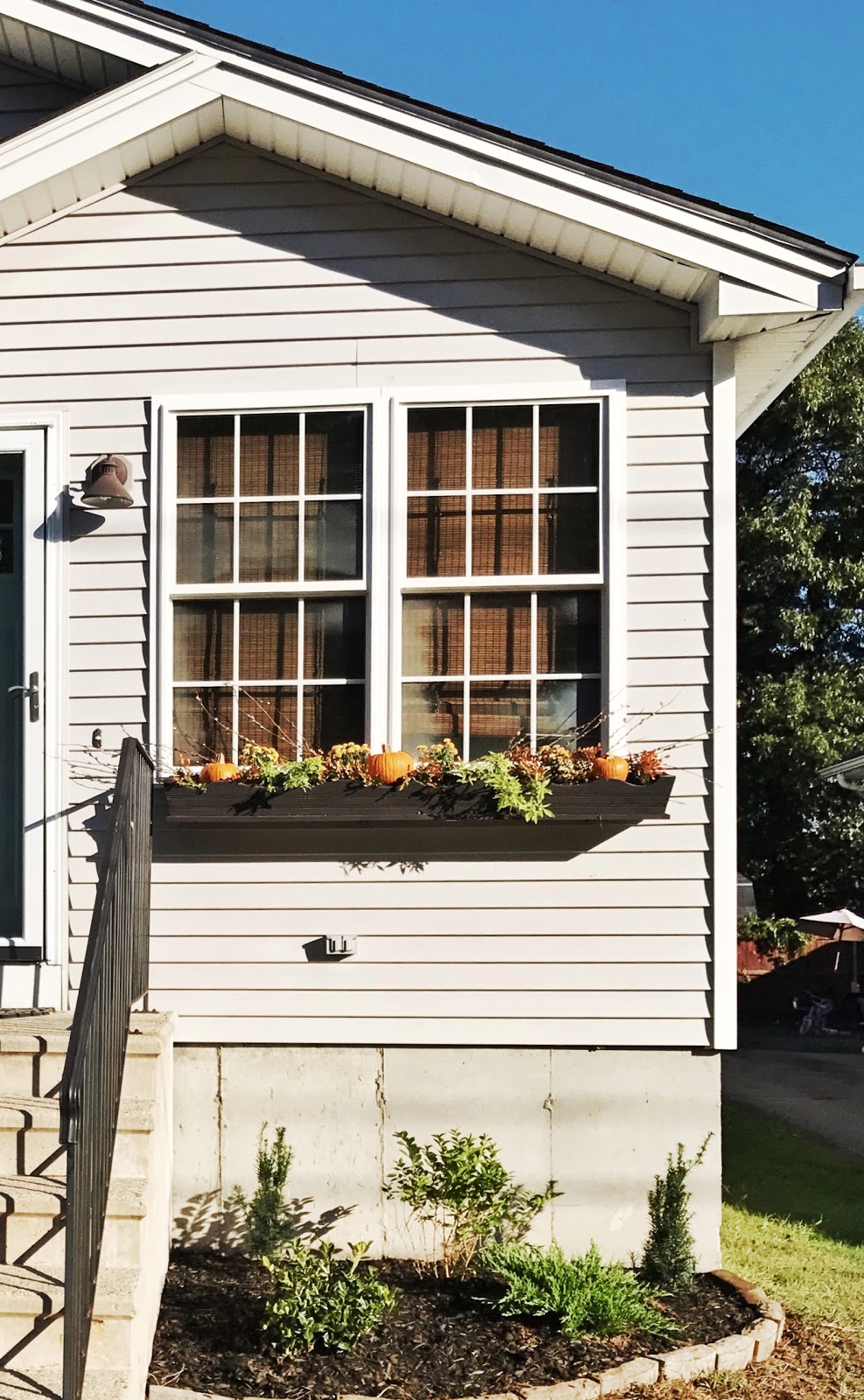 So what do you think? Come join me on Pinterest and see what I’m lovin on my Fall Decor Board!

Also, up next in Fall Appeal, fall landscaping: cleaning out the summer garden beds and planting hardy shrubs. Check back to see what we were able to accomplish in one afternoon. 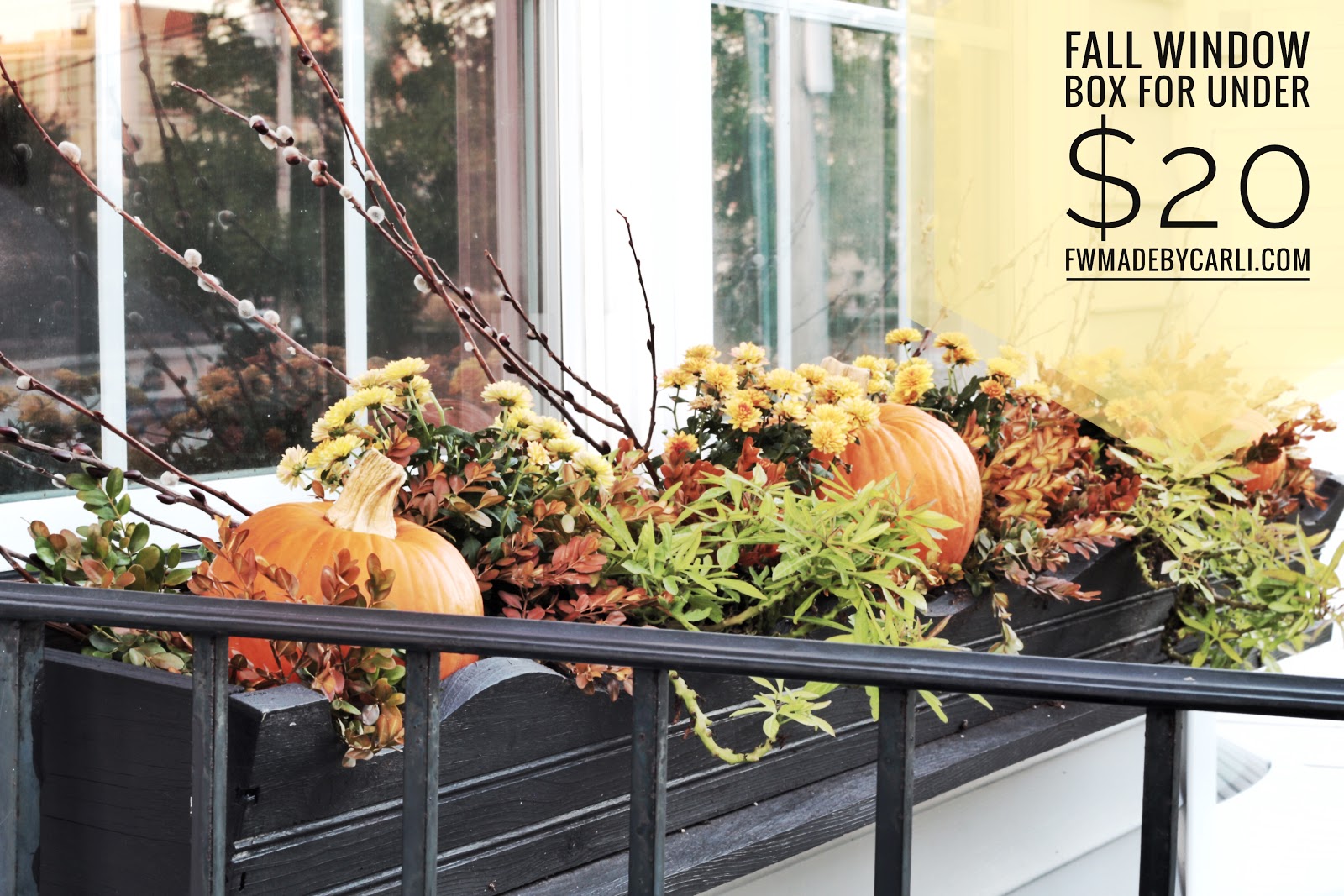 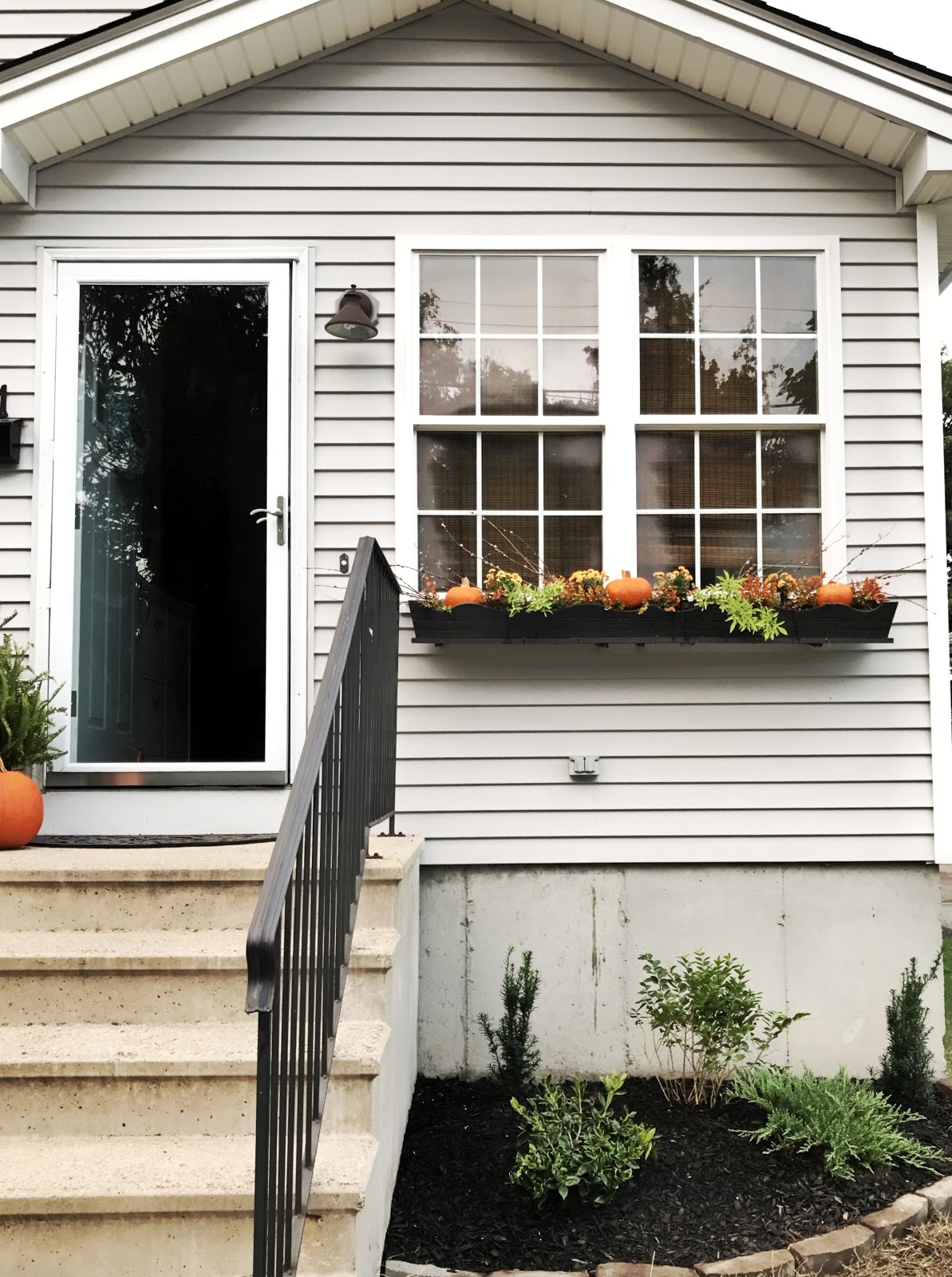 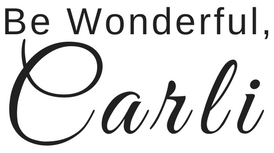