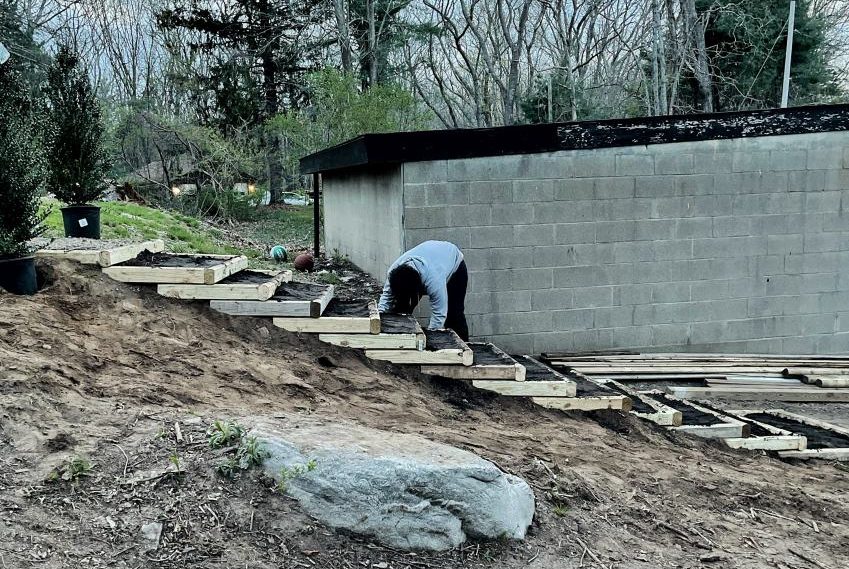 So we have this area in our yard, behind the house, that holds a large storage garage (at some point someone told us it was used as a barn, but I’m rather skeptical of that), but I digress . . . this garage sits in an area that is quite a bit lower than the rest of the yard, I’d say about 10 feet lower.  So to access it you either slide down the hill/or walk all the way around the yard to the unpaved “driveway” that leads to said garage. We don’t currently use this space for much, but since we had some trees cut this past week, my eyes have been a little more open to some possibilities.

I’ve thought about landscape steps in this area since day one, but didn’t think we’d get around to it anytime soon.  But I began perusing Pinterest and came up with a few examples of ideas that I thought would work.  I checked out the instructions and projects like this didn’t look too difficult and they didn’t look too expensive either.  So I hit my husband with a “Babe, what if we have steps built into the slope?  I bet we could hire Youset (our daughter’s boyfriend) to do it!”  Hubs, looked at me and said “Those are nice, text him and see if he wants to do it.”

You see, yes, we are DIYERS, but we’re kinda at a point in our life where we’re kinda tired and if someone younger has more energy and drive to take on a project like this, for the right price, it’s worth it to hire it out!  I sent Youset the pictures of the HGTV tutorial above and he said “Let’s do it!”

So we went out and grabbed the materials, (we used the tutorial above for inspiration, but ultimately modified it to suit our needs.

Youset estimated that we would need 12 steps, so to create them he cut the landscape logs into 3 pieces, 4 feet for the front, and 2 feet for the sides. 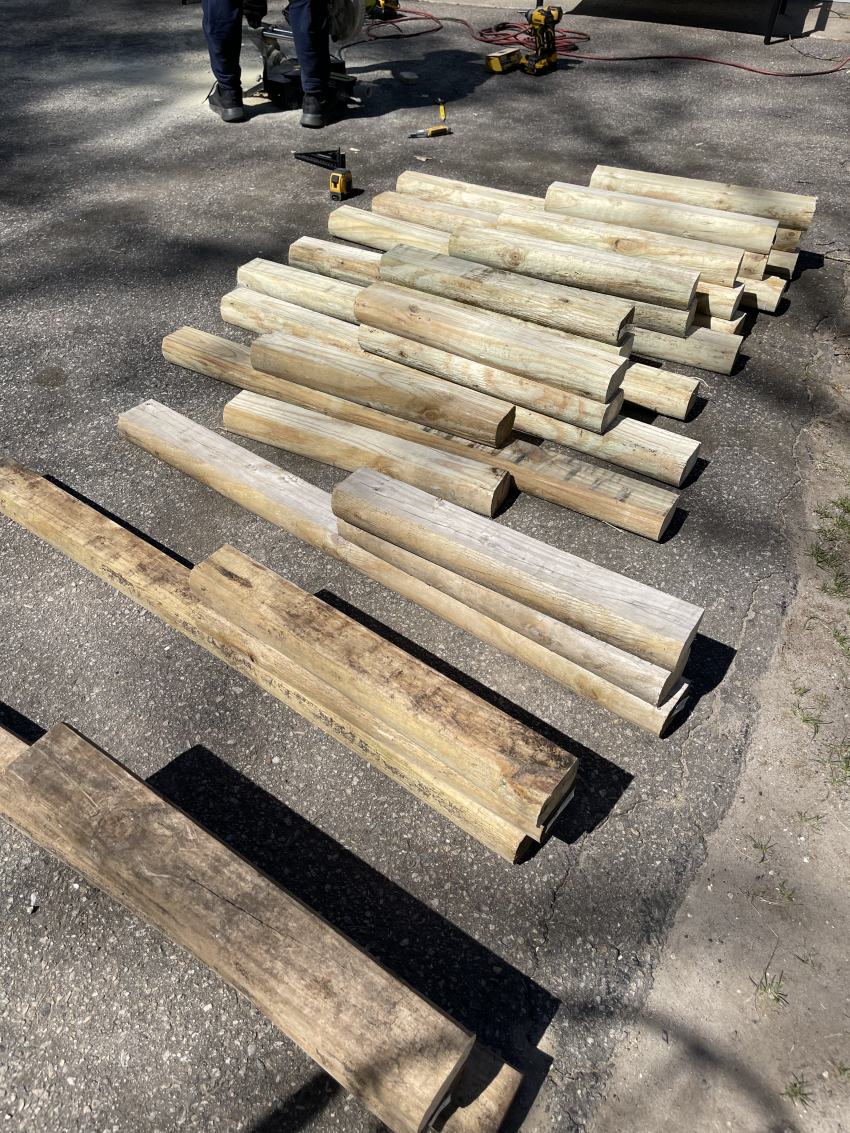 And secured them to create a “U” shape.  He screwed them together with the 5″ deck screws. 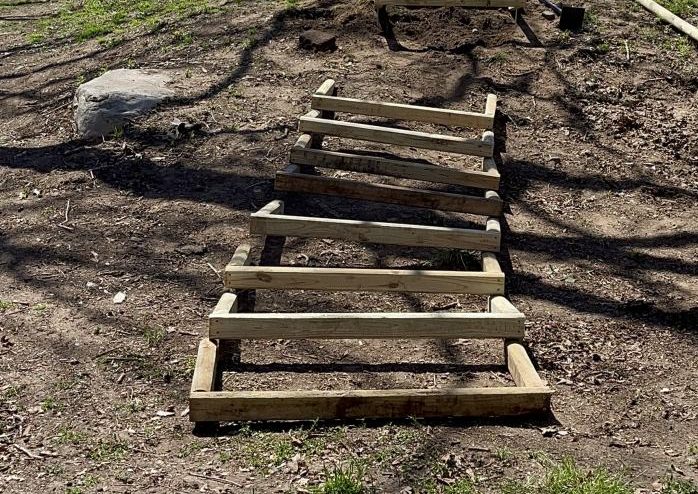 Youset started at the top, although in hindsight, we should have started at the bottom, but we worked it out.  He used this cultivator (works like a charm) to loosen the dirt, and then he dug the top step into the dirt and secured it with a 12″ spike on each side.  He continued with the second step underlapping (that’s a word, right?) the top step, and secured it with another two spikes on each side.  To secure the spikes he predrilled, and then drove the spike in each side with a sledgehammer. He also secured them together with the 5″ screws. 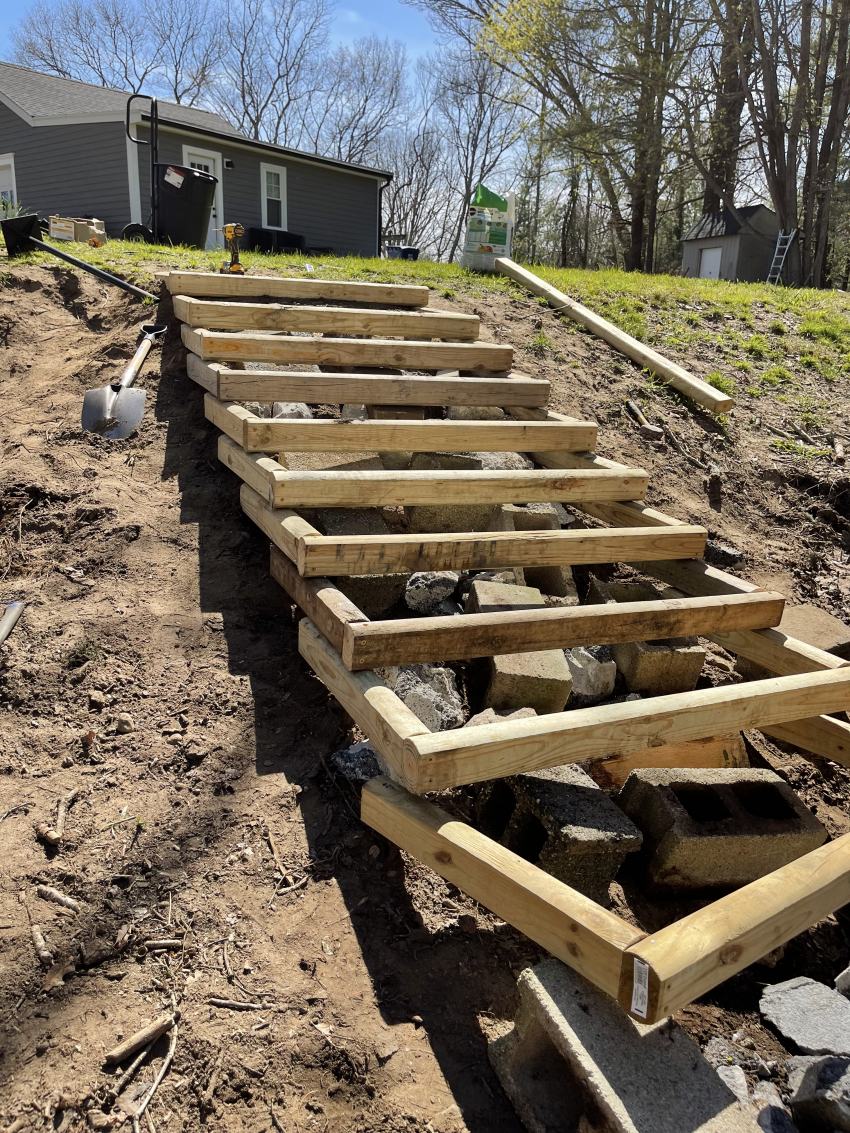 He continued this process all the way ensuring that the step depth stayed relatively the same.  (It’s no secret that I’m no perfectionist, but Youset is, so I had to nudge him a little and let him know it was okay if things weren’t exact.) 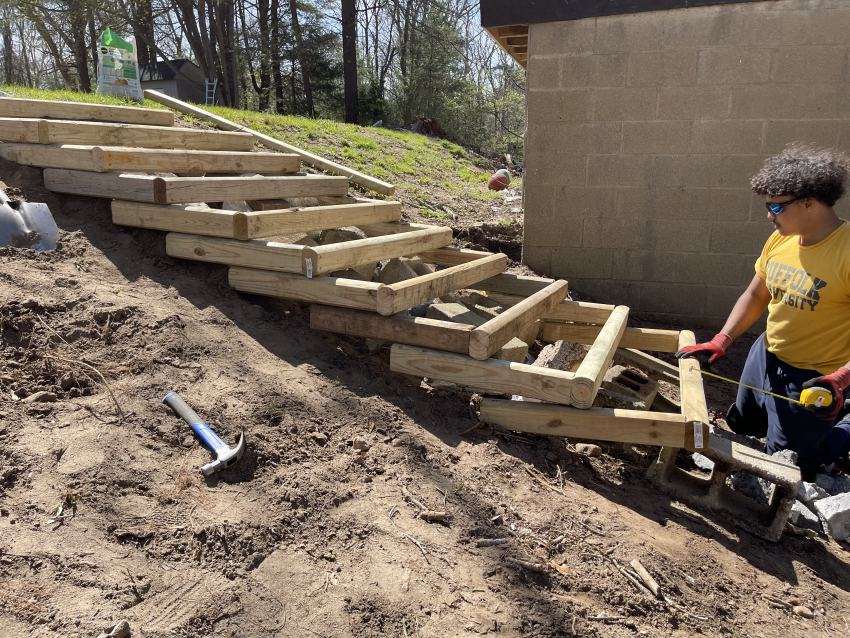 We aimed to have our steps be about 13″ deep, but as the slope changed in some areas we had to let them vary slightly.  We also decided to give it a little bit of a curve, as it seemed more aesthetically pleasing.  (As you may notice, it started out with Youset doing the entire thing, and then I nosed my way into it—I can’t help myself—but I have to give him all the credit for this project, I just stepped in to assist 😉 he’s a great team player!) 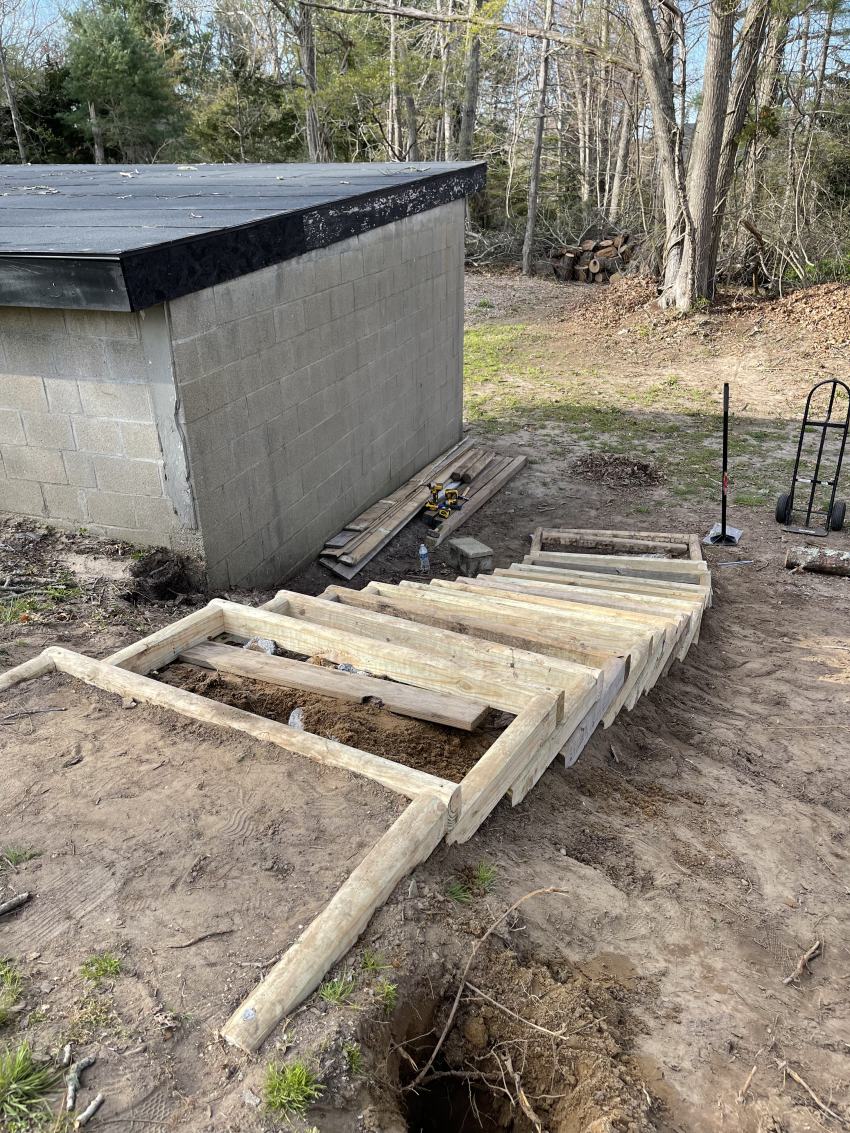 As the dirt was being loosened, we came to find that there were a lot of large roots and boulders in the dirt, so digging into the hill became quite a project, so we began to build on top of the hill, choosing to fill the steps with concrete, gravel, large logs and fill dirt. 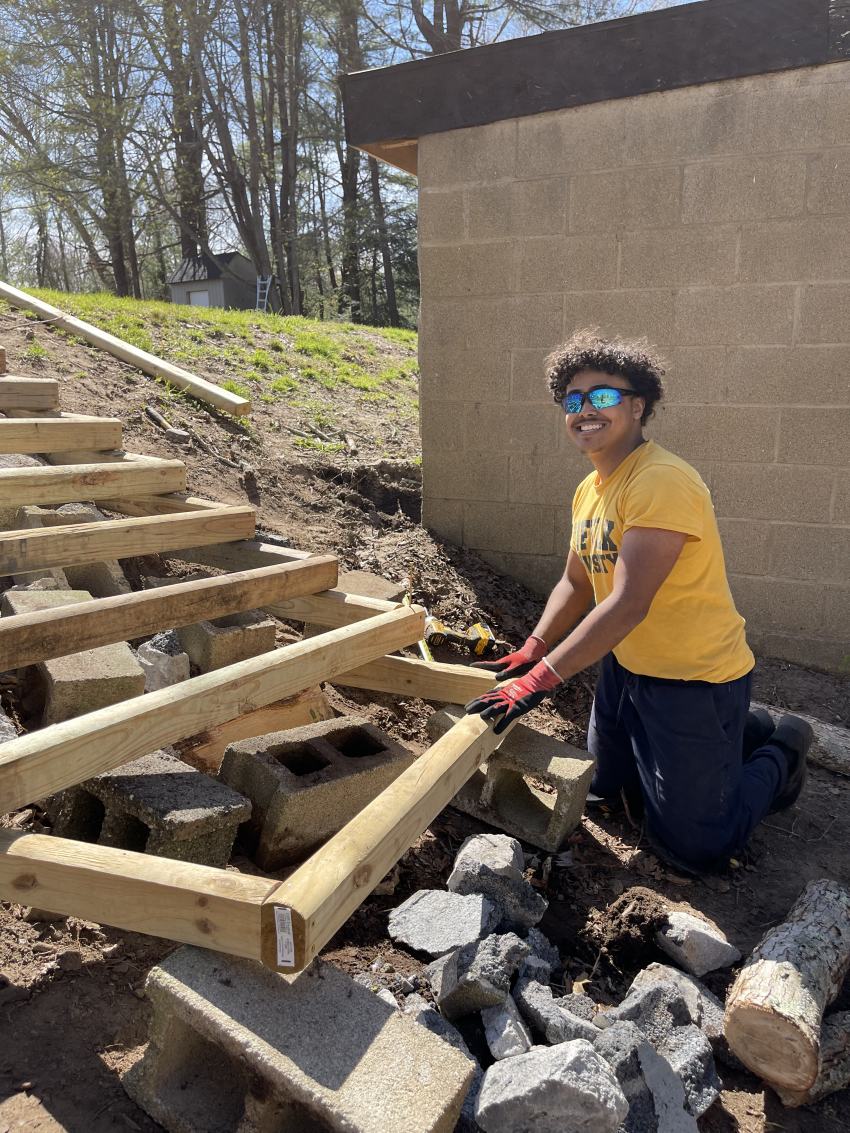 Tamping it down, ensuring that it felt solid and secure.  This process was repeated multiple times, until we could walk on it and feel a solid step. 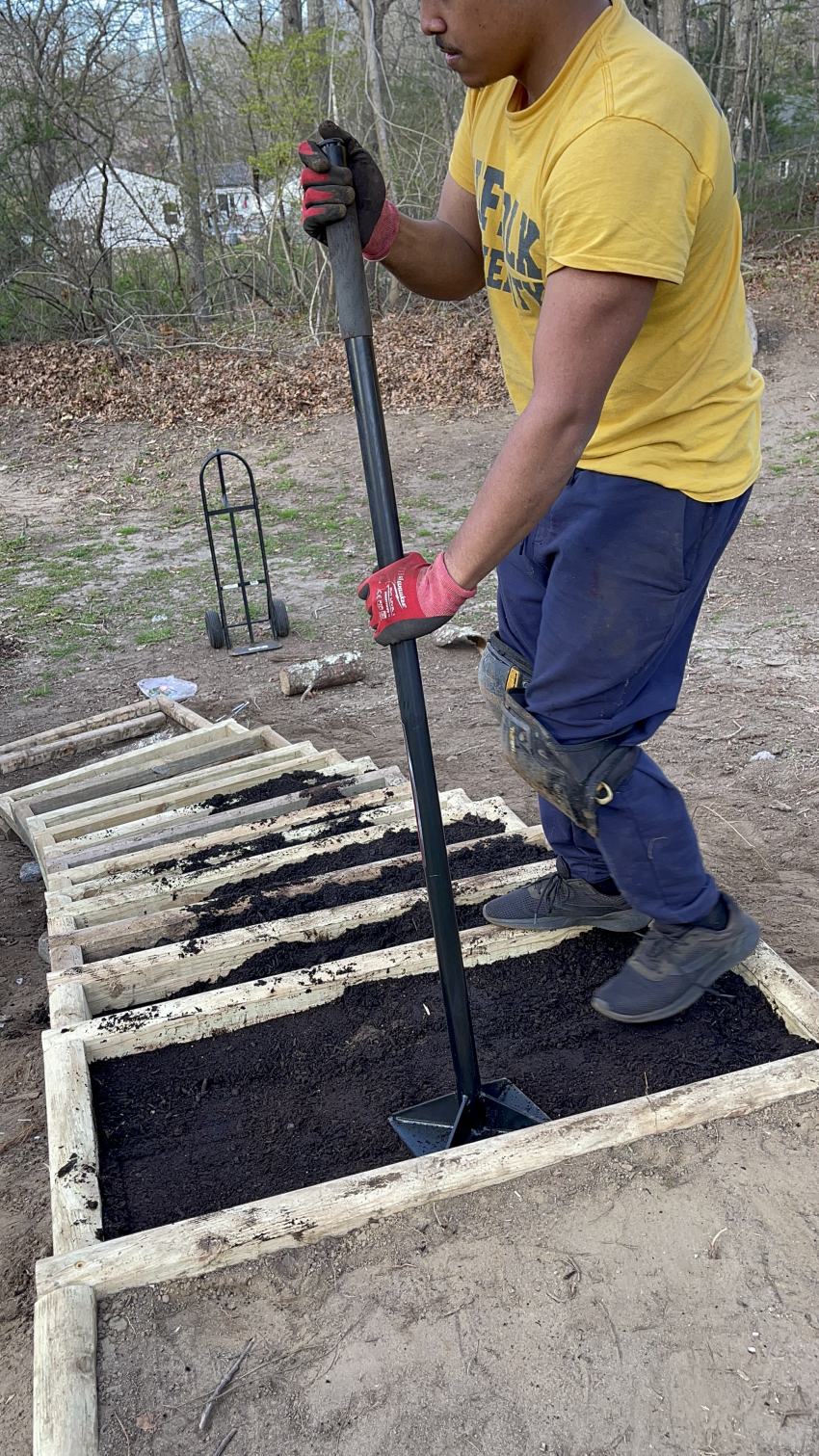 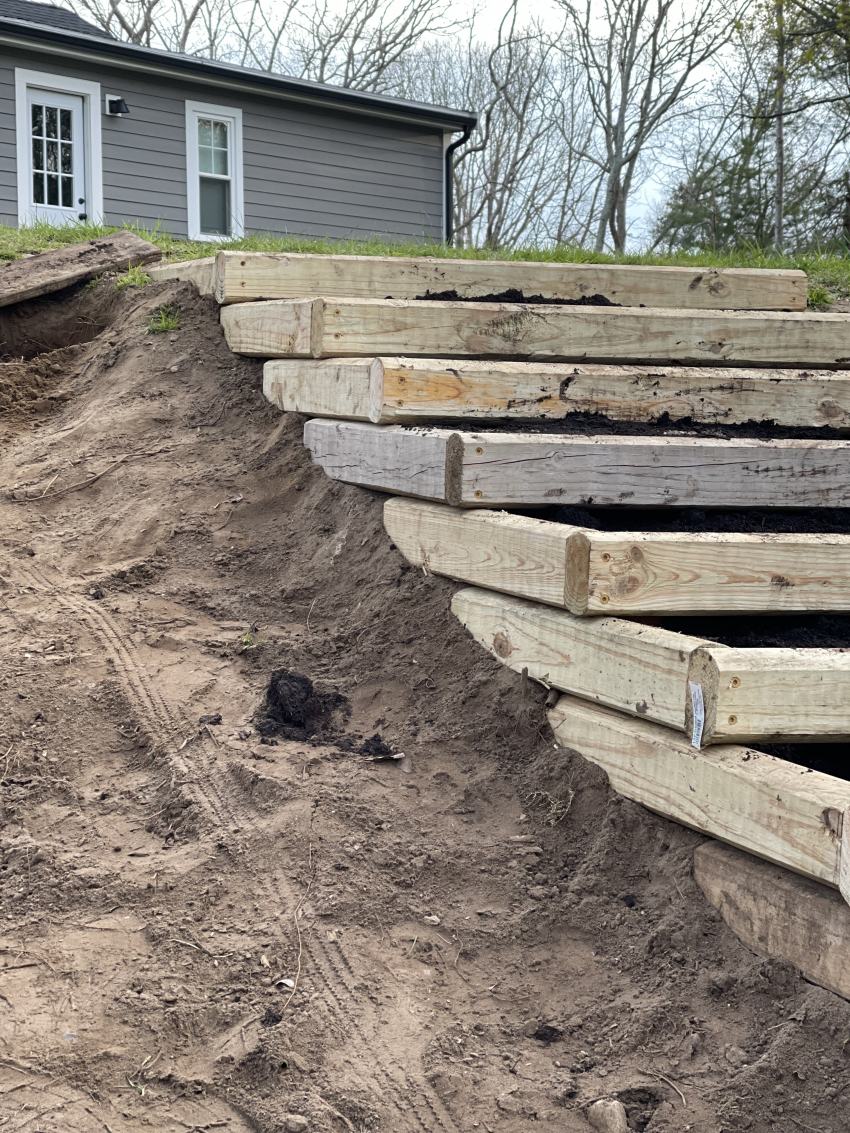 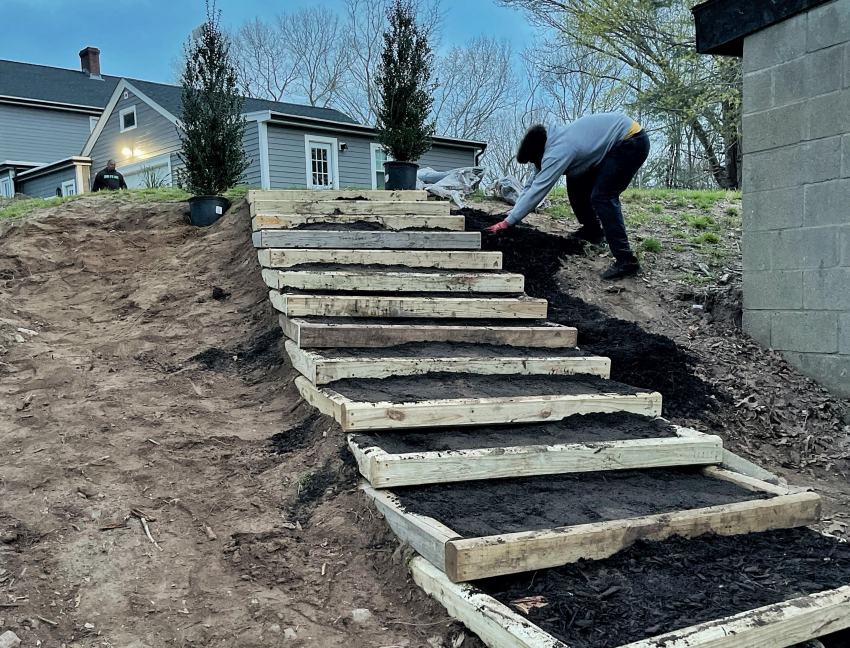 That’s where we left off, the next step is to add the landscape fabric, and pea gravel to the tops, as well as some light landscaping.  (I say light now, but I’ll probably end up making this into a whole project, lol.) This project cost about $250 in material up to this point.  If we bought fill dirt from a stone yard, I’m sure it would have been about $50 cheaper.

I’m just so excited about the progress that was made in just one day! And I have to give Youset a huge shoutout for all of his hard work this past weekend💓💪.