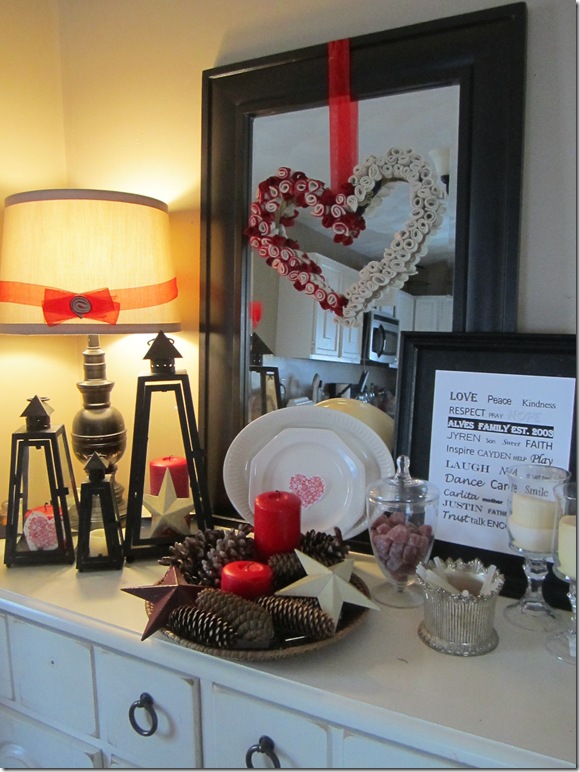 Hi all! Late evenings and early mornings are when I’m most creative or should I say, the only time I have to myself! Last night/this morning I decided that I wanted to create a Valentine’s Day Vignette.  If I had a mantel, this would be on there but I don’t (Boo hoo!) so my buffet/dresser serves as my mantel.  As I look back I don’t think I’ve ever really decorated for Valentine’s Day so “shopping the house” for this vignette was a little difficult.  I’m also not a big fan of red decor so the things I’m going to show you in the vignette are items used as a result of me just being super-duper resourceful.

So in my vignette, I have my awesome lanterns that I told you about in this post.  Ya know they really come in handy for holiday decorating, almost like an apothecary jar. Anyway, I went out to Wal-Mart yesterday trying to score some clearance merchandise from X-mas but they were pretty much wiped out . . . I ended up with four red pillar candles in a cinnamon scent for .37 and .67 cents for small and large and a container of gummy cinnamon heart candies to fill my apothecary jar. Sadly, that was it :(.

So when I got home I thought, hmmmm I’m gonna need a wreath . . . so I searched the net for some ideas, that’s when I came across this post from Smashed Peas and Carrots for a fabric rose wreath tutorial. 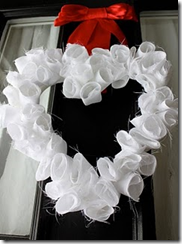 Go check it out, if you want a good tutorial, my tutorials aren’t that good because usually when I do something, I usually just wing it!

So this is what I did:

Grabbed a pizza box from the recycling . . . 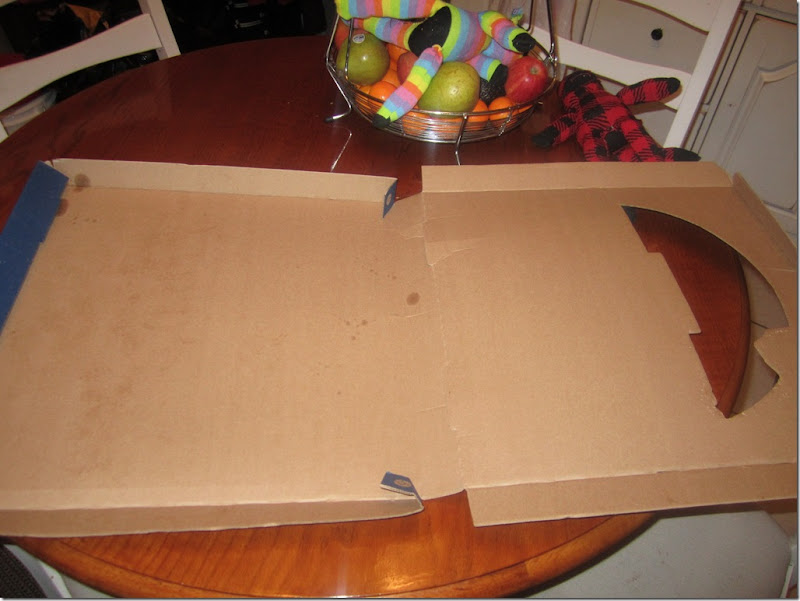 Drew a heart template on it- I like my hearts FAT! 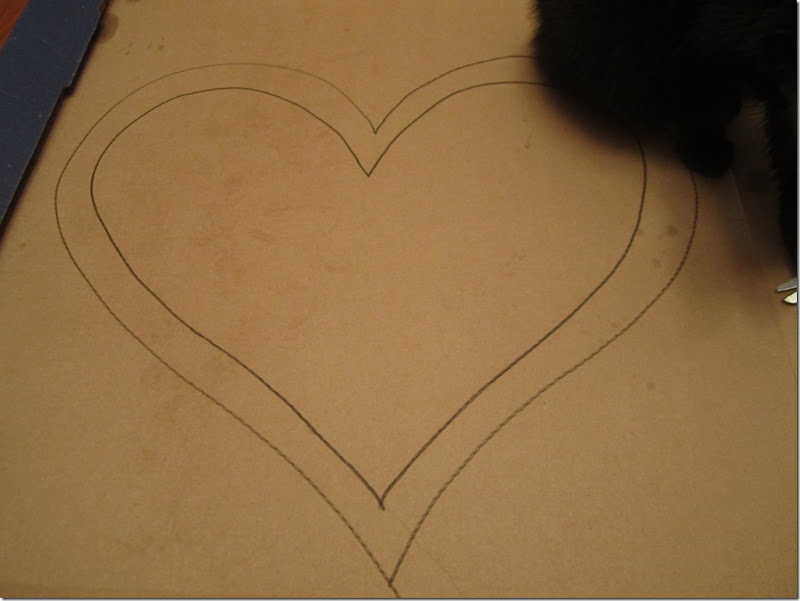 The new addition to our family, Miley, wanted to help . . . 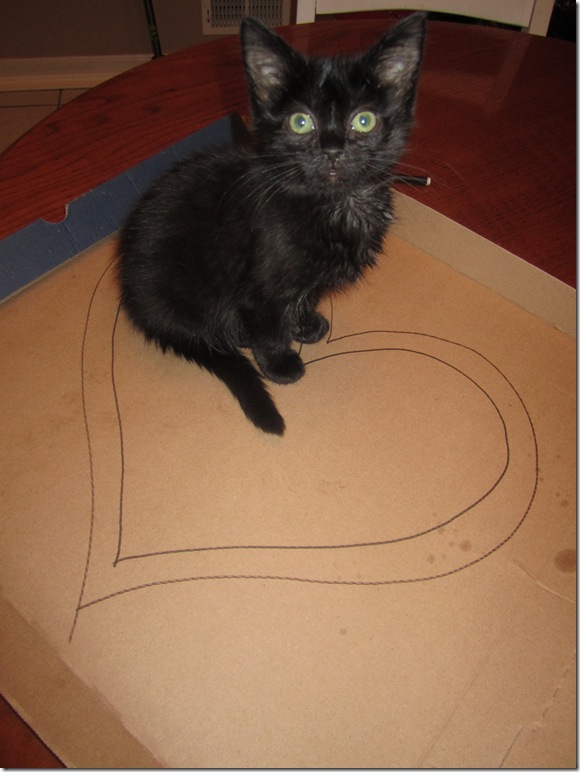 I cut it out (and saved the other pieces, cuz you never know when you’ll need a cardboard heart) 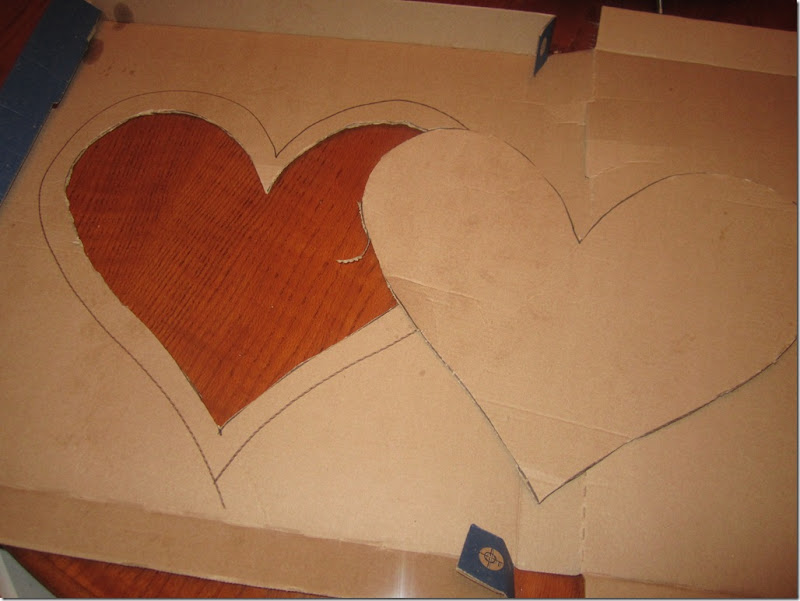 I folded it in half and cut out the middle and this gave me my frame for my wreath-on the other tutorial she used a foam wreath for outdoor use, mine was going to be for indoors so the cardboard worked fine. 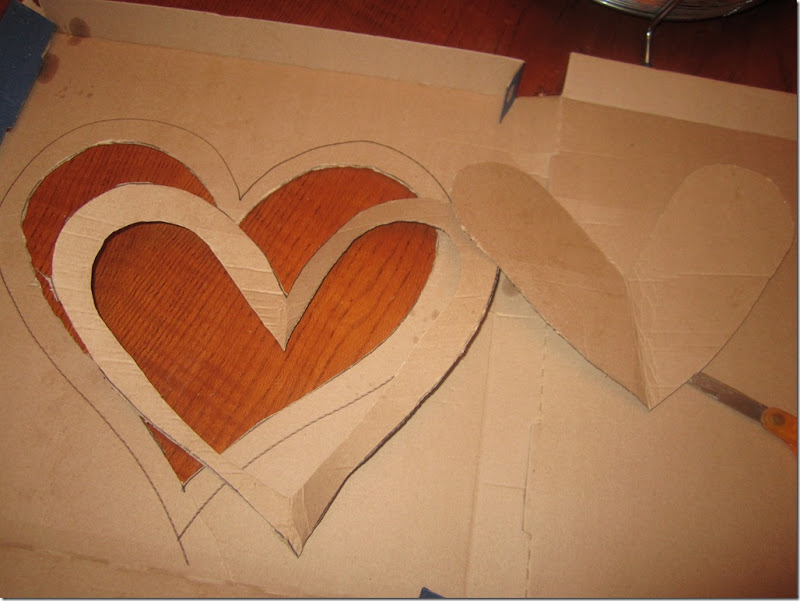 Next, I knew I would need some fabric, so I scoured the basement for anything with red, that’s when I found this old wool tree skirt. 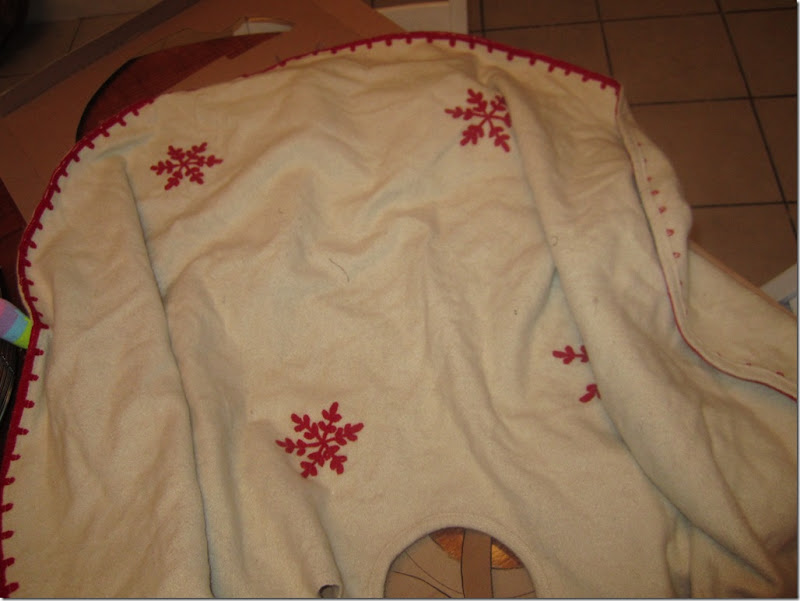 Originally I wanted the wreath to be in all neutral tones, but when I found this, I thought it would be fun to cut right along the trim of the skirt to give the roses a two-toned effect.  I had also found an old red skirt, at this point anything red was up for grabs, lol.  I trimmed right along the hem of the red skirt as well (not pictured). 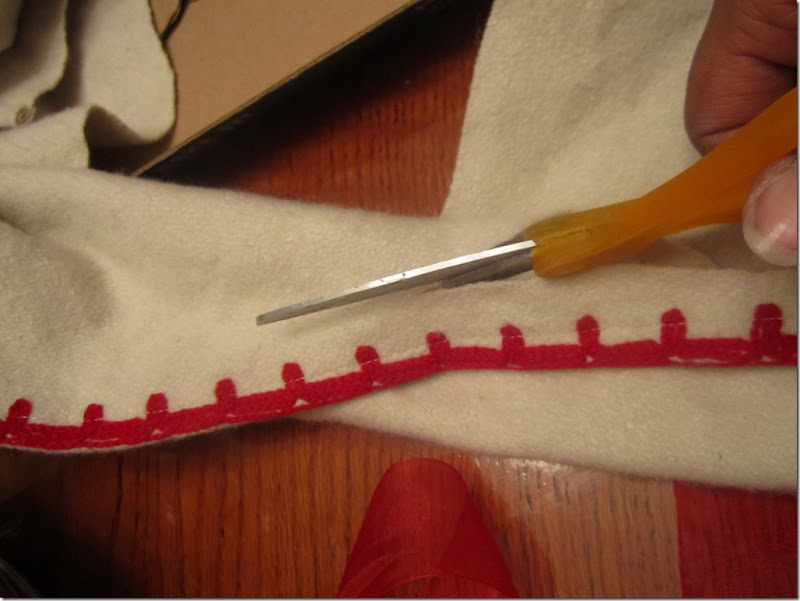 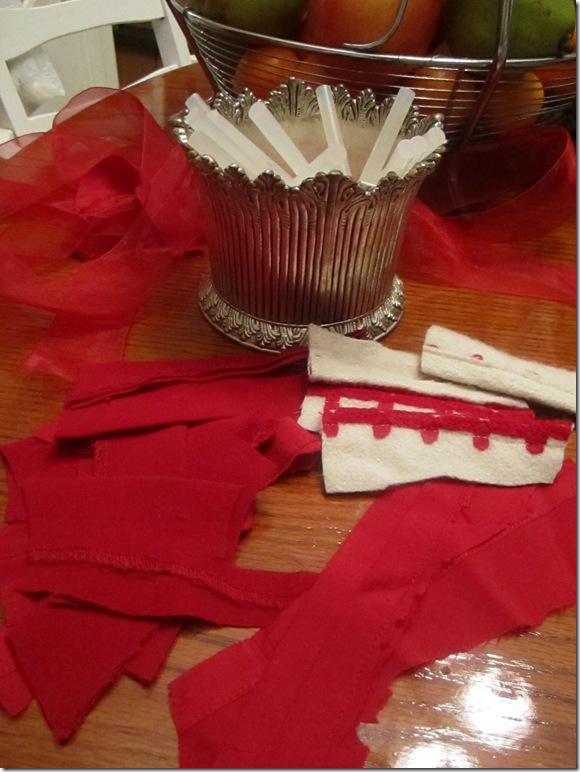 I trimmed the edge into about 1×4” pieces, and rolled each piece around my finger and hot glued them in place. 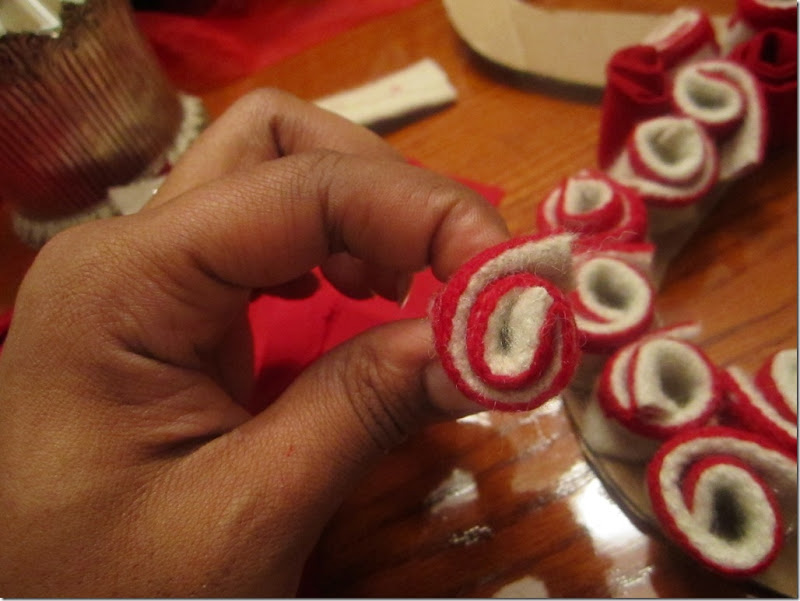 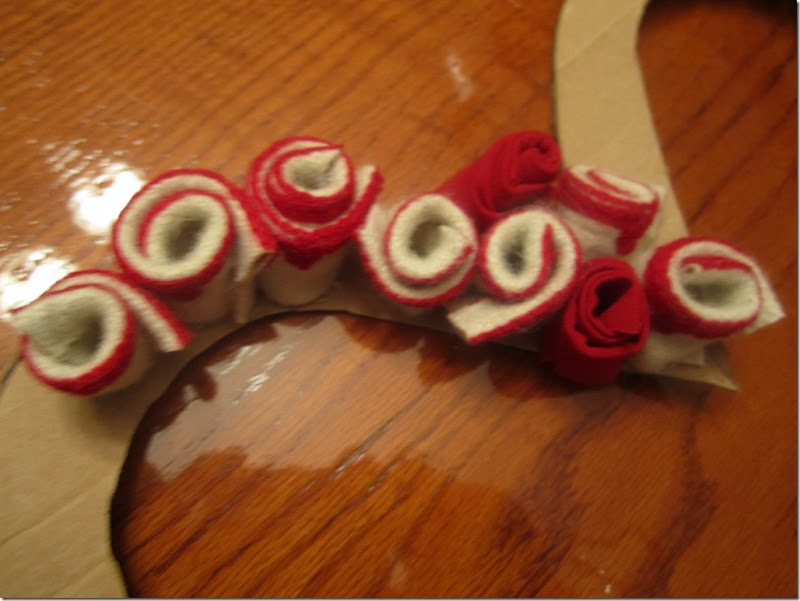 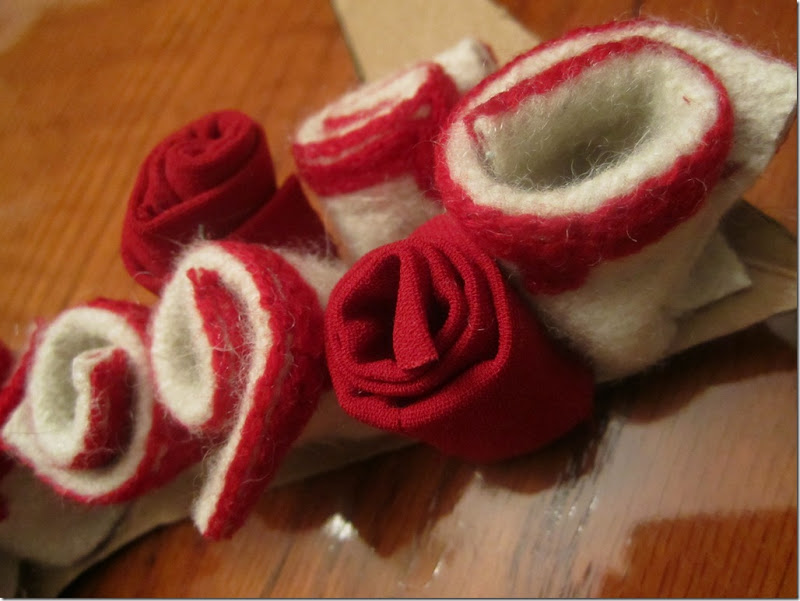 Then I pried the attack kitten off of my leg and glue gun cord . . . 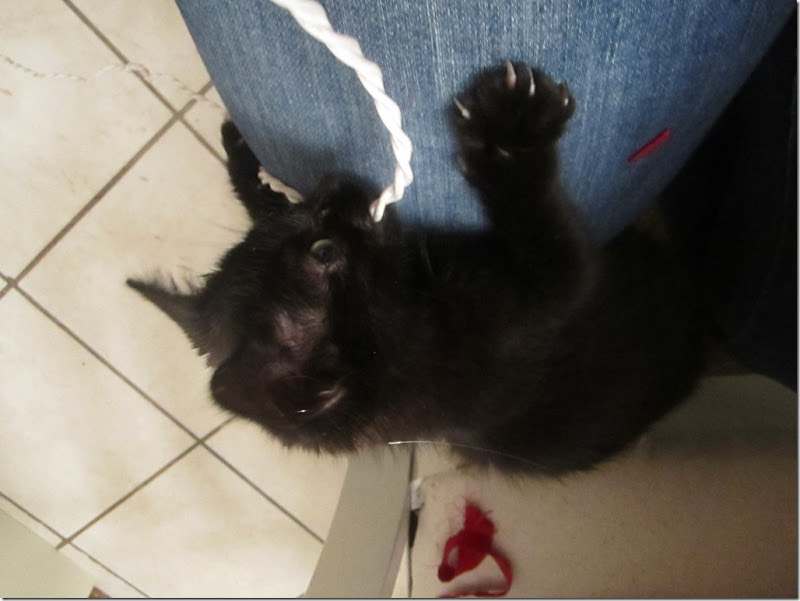 Now I’ll be the first to admit that I have no patience, so I then began to cut the strips longer- to about 2×4” and then rolled them, glued them and then cut in half. This saved lots of time and work. 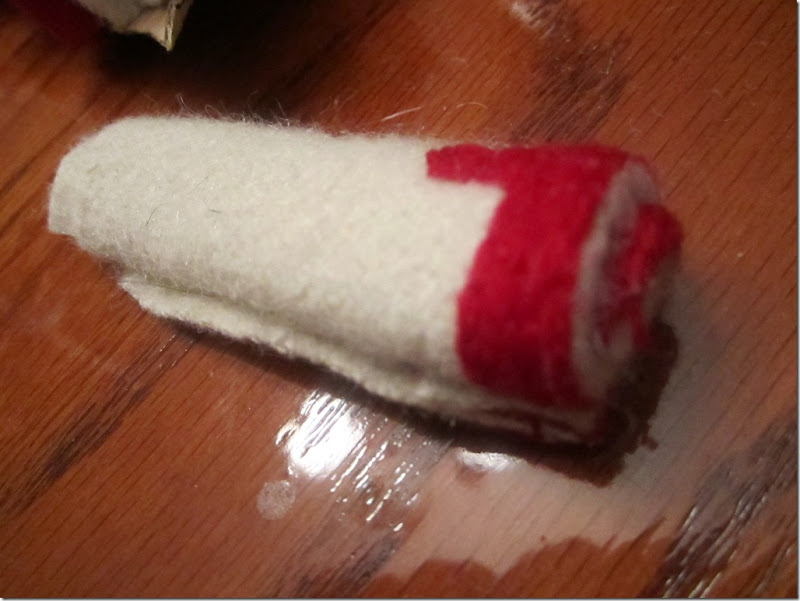 This gave me one red trimmed edge and one white one . . . 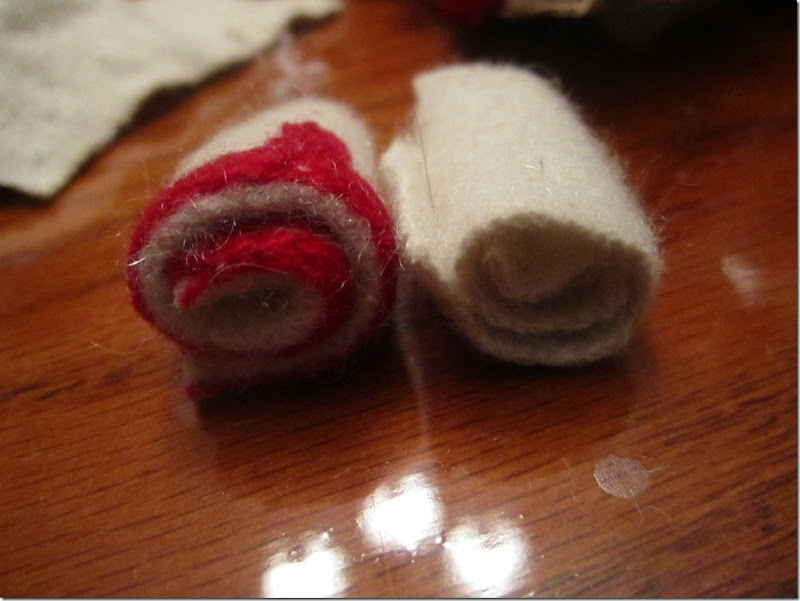 Then I got really smart and rolled a bunch of them, glued them, cut them and then glued them in place on my frame. 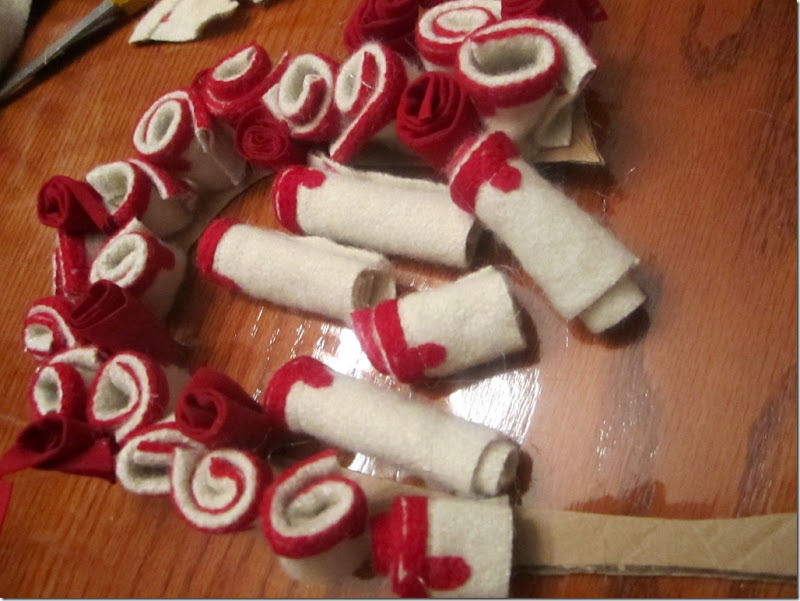 Then I found some red sheer ribbon to hang it by and cut to my desired length, then hot glued the ends together in a loop. 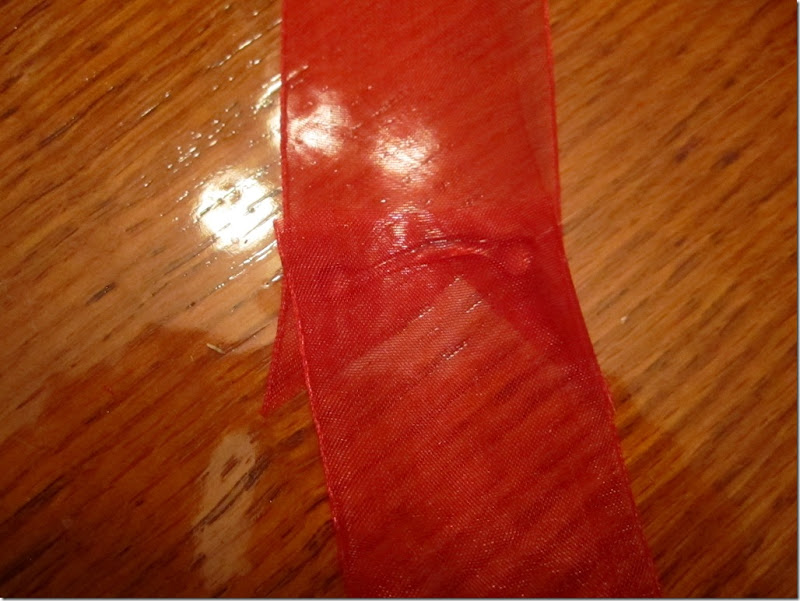 Next I glued the ribbon to the back-center of the heart. (In hindsight I would have painted/covered the cardboard frame or glued the roses to the printed side so the wording wouldn’t show- because I was planning on hanging it in front of a mirror.) 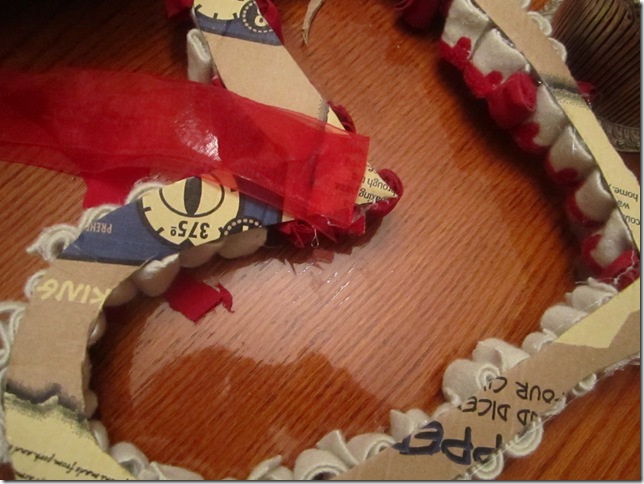 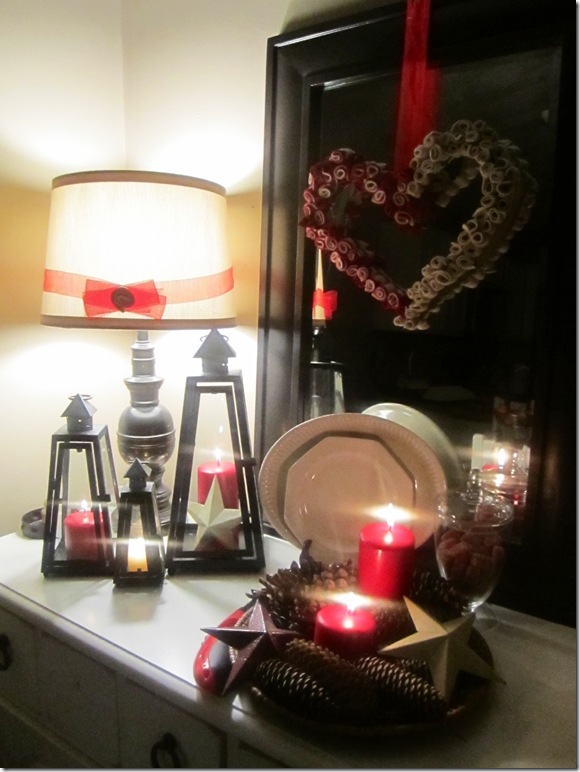 To add to my vignette, I wrapped the extra ribbon around my lampshade and and hot glued it into a bow and placed a rose in the center with hot glue. 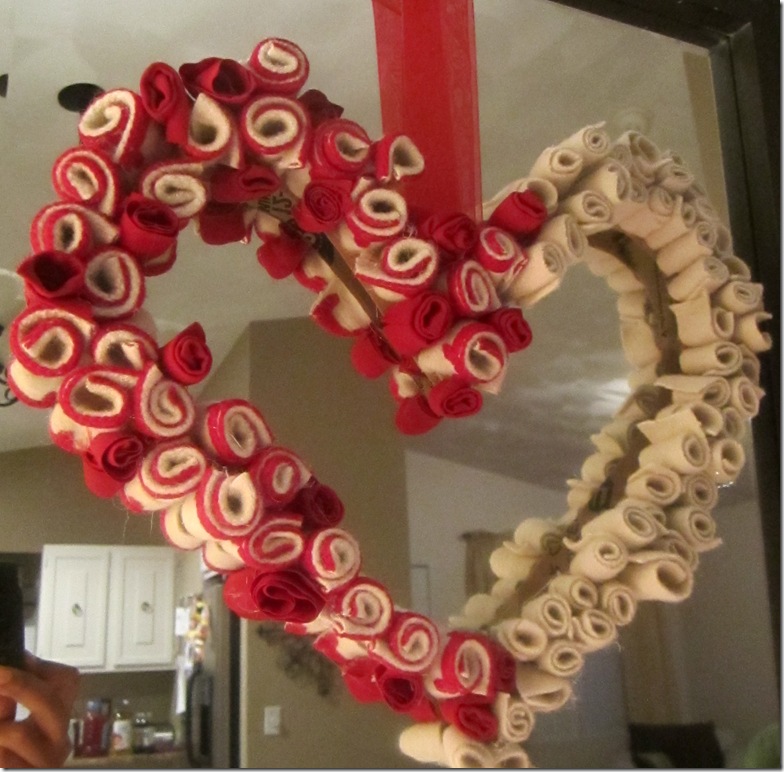 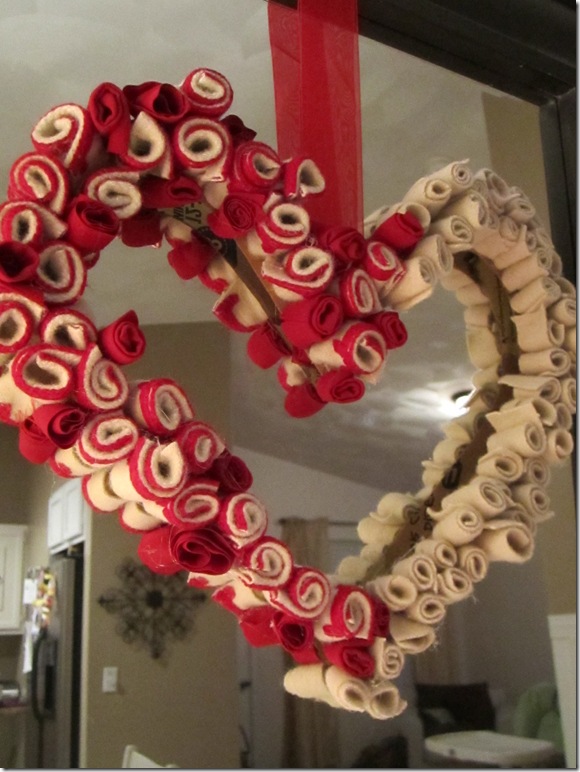 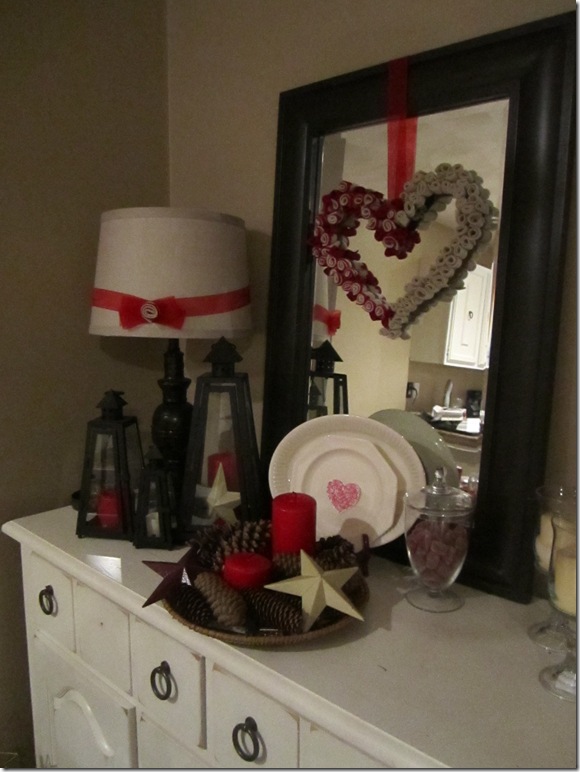 I also added a little heart graphic that I printed off of the computer and taped it to my plates. I’m rather pleased with the results and my kids were excited to see something different when they woke up this morning too!

Here’s a before pic (from Christmas) 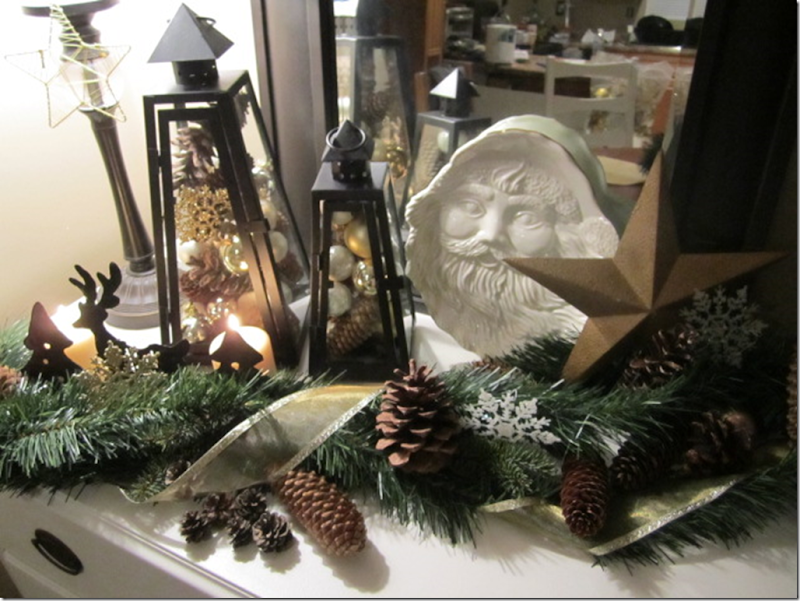 and here’s an after 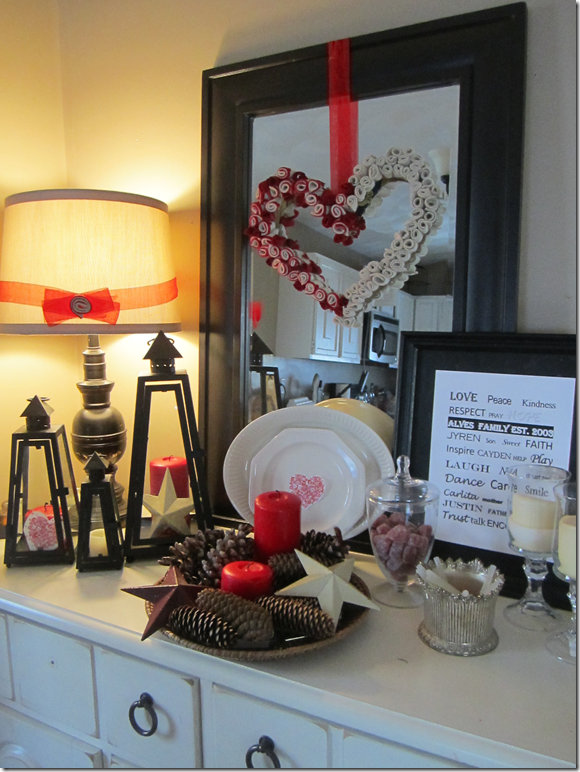 Don’t you love how I left my glue sticks there like a decoration . . . oops! 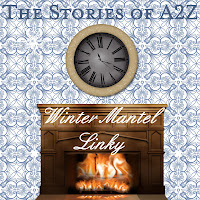 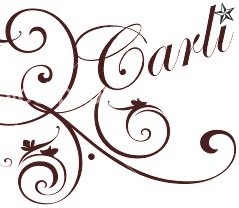